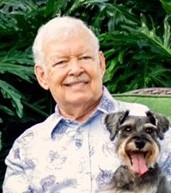 William G. “Bill” Clark passed away at home on September 30, 2020 after a long battle with Huntington's Disease. A brief memorial service will be held at 1:00 p.m. on June 12, 2021 at Abels Funeral and Cremation Service, Engelkes Chapel in Grundy Center, Iowa. After the service anyone who wishes to share a memory of Bill is welcome to do so. Afterward, there will be coffee and light snacks and a time to visit with family.

Bill was born on March 9, 1942 to Delbert and Vivian (Boren) Clark, the third of three sons. He completely enjoyed his school years, especially high school where he got good grades, played several sports (not football though) and was an active participant in band and chorus.  He graduated in 1960 and, after saving enough money that summer, went to Iowa State for a year.  It was long enough to make him a life-long fan.

His first long-term job started in 1963 with Addressograph-Multigraph. They sent him to school in Cleveland for three months and he was hooked on the challenge of finding the problem and fixing it.  After six years he was ready for a new challenge and went to work for Carpenter Paper in 1969 selling the paper to run on the machines that he had been fixing. It was the start of a forty-one-year career during which he never switched jobs though the company name had several changes. He retired in 2011 to his cabin in Minnesota where he drank his morning coffee looking at the lake.

Bill was preceded in death by his parents; daughter Suzanne Clark and a favorite nephew. He is survived by his wife Lorri; children Robert (Traci), Tom (Sheila), Dan and Dee Pommier (Michael); four grandchildren: James, Kayla, Tommie and Shannon; one great-grandson Spencer and brothers Ted Clark and the now late Bob Clark.

He was a proud member of Westgate-Adelphic Blue Lodge, the Consistory and the Shrine. Bill was known for his sense of humor, positive outlook and his work ethic and, of course, fishing, Iowa State and sometimes golf.

Any memorials can be made to The Huntington's Disease Society, The Shrine Hospitals or your local hospice.

To order memorial trees or send flowers to the family in memory of William Clark, please visit our flower store.