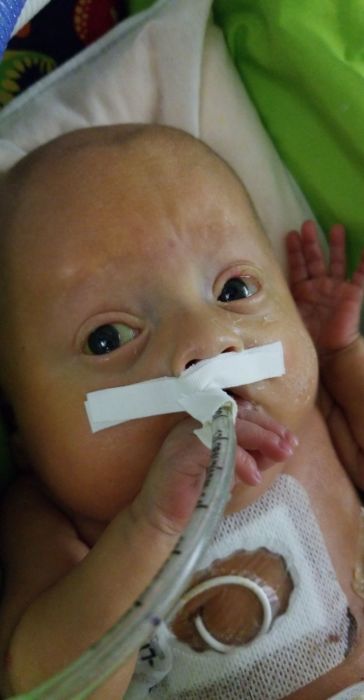 Tucker Lynn Ragsdale, 4-month old son of Nathan & Ariana (Oliver) Ragsdale, earned his tiny but mighty angel wings on Tuesday, April 2nd at the University of Iowa Stead Family Children’s Hospital in Iowa City, after a brave fight in his short, but beautiful life. Visitation for Tucker will be held on Monday, April 8th from 4:00 PM to 7:00 PM at Abels Funeral & Cremation Service-French-Hand Chapel in Reinbeck. The funeral service will be held on Tuesday, April 9th at 11:00 AM, preceded by an hour visitation at Candeo Church, 1405 Greenhill Rd., Cedar Falls, IA. A private family burial will follow the funeral service at the Reinbeck Cemetery. The family kindly asks that in lieu of flowers, memorials may be directed to them, where they plan on establishing a memorial in Tucker’s memory. Memories of Tucker or messages of condolence may be left for the family at www.abelsfuneralhomes.com

Tucker was born on November 29, 2018 at the University of Iowa Hospitals & Clinics, 22 weeks and 5 days’ gestation (18 weeks premature), weighing 1 lb. 4 ounces and measuring 12 inches long. Tucker was a twin, his fraternal brother Beckett was born the following day, November 30th. Although Tucker suffered many health obstacles, he miraculously overcame many of those. Because of the expertise and excellent care of the U of I team of doctors and nurses, Tucker’s family was able to have him as long as they did, 124 blessed days.

Although sick, Tucker was very aware of his surroundings and was very expressive, giving those near him his infamous ‘side eye’. Tucker was able to smile through the pain and loved to hold his mommy and daddy’s finger and he loved being sung to. His big brother Oakley was extremely proud of him, calling him ‘my Tucker’. His twin brother Beckett enjoyed lying next to Tucker, resting on his chest, a bond only twins might know.

Tucker was able to light up the room by his tiny, but mighty presence. Right up until the end, Tucker was a joyful baby. His family is so proud of his strength and because of it, they realized how much stronger it made them. Tucker was resilient, a fighter, until he could no longer fight the battle he endured for 4 unbelievable months. He will be so dearly missed by his family, but the memories they made in those 4 months will last a lifetime, bringing them comfort when they need it most.

To order memorial trees or send flowers to the family in memory of Tucker Ragsdale, please visit our flower store.
Open