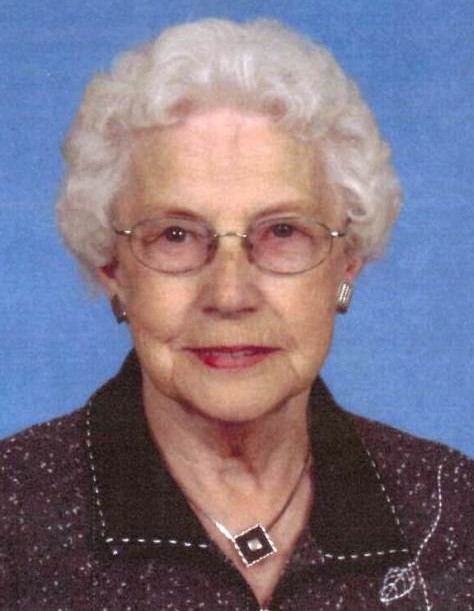 Thelma Dirks, 97, of Grundy Center, passed away on Easter Sunday, April 21, 2019 at the Grundy Care Center, in Grundy Center.

Funeral Services will be held at 3:00 P.M. Tuesday, April 30, 2019 at Orchard Hill Church in Grundy Center with burial in Lincoln Township Cemetery. Visitation will be held from 1:30 P.M. until time of services at the church on Tuesday.

Thelma (DeBerg) Dirks was born on May 29, 1921 in Lincoln township Grundy County to Charles and Hattie (Beninga) DeBerg.  She had her entire schooling at the Dike Consolidated school and graduated in 1938

On September 11, 1941 she was united in marriage to Harold Dirks in the Lincoln Center Christian Reformed Church with Rev. Henry Zwaanstra officiating.  They established a home and farmed in Colfax Township for 10 short months when Harold was drafted into the Army on December 16, 1942.  She, with their young son Roger, resided with her parents until they joined their husband and father and lived in California and Texas for over 2 years. When her husband was sent to Germany in March 1945 she and her son again resided with her parents in Lincoln township until Harold’s military discharge  as a Sergeant in 1946.

They once again began farming in Lincoln township for 20 years until they moved to Grundy Center on December 9, 1971 where both of them found employment. She worked at the Grundy County Memorial Hospital for 6 ½ years after receiving her CAN certificate from Hawkeye Tech.  She was also employed at Skandia Inn and later as cashier at the Chech’s M & M Food Market retiring in 1982

Thelma was a lifelong member of the Lincoln Center Christian Reformed Church where she was a Sunday School and Bible School teacher for many years.  She sang in the choir for nearly 50 years as well as singing soprano in The Ladies Trio for many years as she dearly loved music.  She was a faithful member of the Ladies Fellowship and Dorcas Society.

Thelma was preceded in death by her beloved husband of 59 years in 2000, her parents, 2 brothers, Melvin in 1933 and Herman, 5 grandchildren and 2 great grandchildren.

Interment will be in the Lincoln Township Cemetery, Grundy Center, Iowa and laid to rest next to her beloved husband of 59 years.

To order memorial trees or send flowers to the family in memory of Thelma Dirks, please visit our flower store.