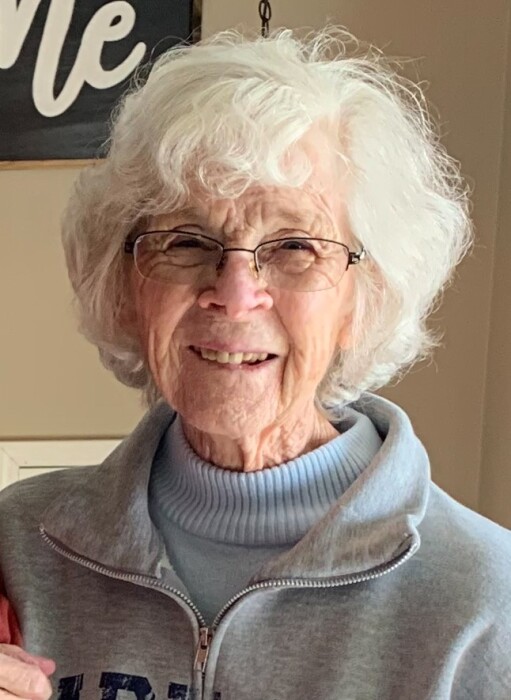 Ruth Ellen Ware, 90, recently of Clive and a long-time resident of Grundy Center, died March 22, 2022 at the UnityPoint Taylor House Hospice in Des Moines. She was born on a farm near Fern in Grundy County, Iowa on January 1, 1932, the adored third child of J. Frederick and Lena (Smit) Abels.

After her father died when Ruth was three years old, her family moved to Grundy Center. A child of the Great Depression, she knew frugality. As a teenager she earned her own spending money after school, on weekends and during the summer at Manly Drug Store. After high school graduation in 1950, she worked as a bookkeeper and teller at Farmers Savings Bank in Grundy Center.

On July 1, 1952, she married Charles Lincoln Ware in the F.E. Warren Air Force Base chapel in Cheyenne, Wyoming. While in Cheyenne, she kept books for Stockgrowers National Bank until the birth of her first child. In 1954, the young family returned to Iowa, building their life on a new farmstead south of Grundy Center where they lived for 65 years.

A cancer survivor several times over, she chaired the Grundy County chapter of the American Cancer Society. She also served in different capacities for churches where she was a member, as Sunday School and catechism teacher, elder, treasurer and women’s group leader. She enjoyed worshipping her Lord at Bethany Presbyterian Church in Grundy Center, Alice Church of God in Conrad, and Salem Church of Lincoln.

Ruth and Charles enjoyed traveling and being outdoors, whether it was as Winter Texans in Alamo, Texas or camping with family in the Rockies, Ozarks, Pike’s Peak State Park, and other picturesque parts of northeast Iowa. They celebrated their 50th wedding anniversary by driving to Alaska. Ruth was an accomplished but humble cook, stitched most of the clothes her daughters wore until they made their own, and created patchwork quilts for numerous family members.

She is preceded in death by brother Virgil Abels and sister Doris (Abels) Beuttler.

The funeral will be 10:30 a.m. on Saturday, April 2 at Bethany Presbyterian Church in Grundy Center, with burial at Rose Hill Cemetery, followed by a meal at the church. Visitation will be 4-6 p.m. on Friday, April 1 at Abels Funeral and Cremation Service Engelkes Chapel in Grundy Center.

The family wishes to thank the nurses and staff at Taylor House for their loving care.

To order memorial trees or send flowers to the family in memory of Ruth Ware, please visit our flower store.