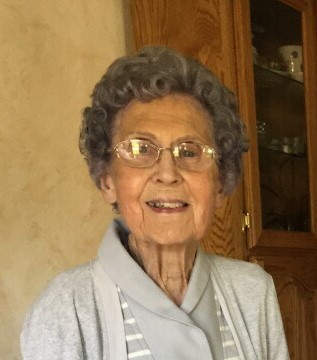 Ruth M Allyn, 93, formerly of Eldora and Manchester, died on August 17, 2018 at her home in Oakdale, MN with her loving family by her side. A funeral service will be held on Monday, August 20, at 10:30 AM at the First Baptist Church in Eldora. A visitation will be held prior to the service starting at 9 AM. Burial will follow later in the afternoon at 2 PM at the Greenwood Cemetery in rural Masonville. Creps-Abels Funeral Home is caring for Ruth and her family. Online condolences may be made at www.abelsfuneralhomes.com

Ruth M Allyn was born on December 5, 1924 in Union, IA, to her parents Charles and Pearl (March) Yantis. Ruth graduated from Whitten High School with the class of 1941. Ruth moved to Manchester and was united in marriage to Frank Raymond Allyn on June 1, 1945 at the First Baptist Church in Manchester. Ruth worked alongside Frank on the farm and together they had two daughters, Karen and Anita. Ruth and Frank farmed together for over 40 years, eventually moving to Eldora to be closer to family.

Ruth enjoyed her flower gardens and spending time with her family. Ruth was a member of the First Baptist Church of Manchester and Eldora and enjoyed spending time volunteering at church, and at the Manchester hospital.

To order memorial trees or send flowers to the family in memory of Ruth Allyn, please visit our flower store.