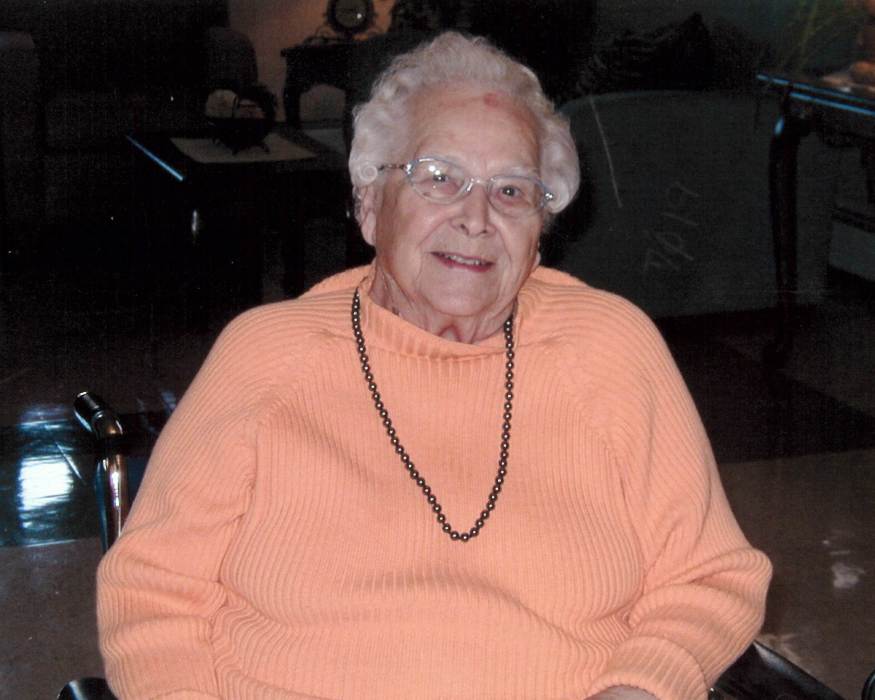 RoxaBelle Huggins, 101, of Eldora and formerly of Redfield, Iowa died of natural causes on Sunday, September 10, 2017 at Valley View Specialty Care in Eldora, Iowa while under the care of Care Initiatives Hospice.  A visitation will be held at 9:00 a.m. on Saturday, September 16, 2017 at the Eldora United Methodist Church followed by her memorial service at 10:00 a.m. with Rev. Allen C. Craft officiating.  Burial will be held at East Linn Cemetery in Redfield, Iowa at 2:30 p.m. on Saturday.  Creps-Abels Funeral Home in Eldora is caring for RoxaBelle and her family.  Online condolences may be made to the Huggins family at www.abelsfuneralhomes.com

Mrs. Huggins was born March 8, 1916 to Viva and John Allred in Des Moines, Iowa.  The family moved to Redfield, Iowa in 1918 where she graduated from High School in 1933.  She married Herbert L. Huggins on September 9, 1934 and to this union one daughter, Herberta was born in 1936.  RoxaBelle was a linotype operator and a homemaker.  Her family and her faith were most important to her.  She was a member of the United Methodist Church in Redfield, Iowa until transferring her membership to the Eldora United Methodist Church after becoming a resident of Valley View in 2007.  RoxaBelle was an avid Iowa Hawkeye fan and rarely missed a football or basketball game on T.V.  Over the years, she enjoyed traveling, playing bridge, crafts, reading, and doing puzzles.

Mrs. Huggins is survived by her daughter, Herberta (Vic) Reist of Eldora, Iowa; two grandsons, Doug (Ann) Reist of North Aurora, Illinois and Dan Reist of River Forest, Illinois; two great grandsons, Jake Reist (fiancé Destiny Gonzales) of Savannah, Georgia and Matthew Reist of Bloomington, Indiana.  She is also survived by many nieces, nephews, friends, and her namesake, RoxaBelle Owen.  She was preceded in death by her husband, Herbert; her parents; sister, Vemba Kenney and her brother, Michael Gaddis.

To order memorial trees or send flowers to the family in memory of RoxaBelle Huggins, please visit our flower store.