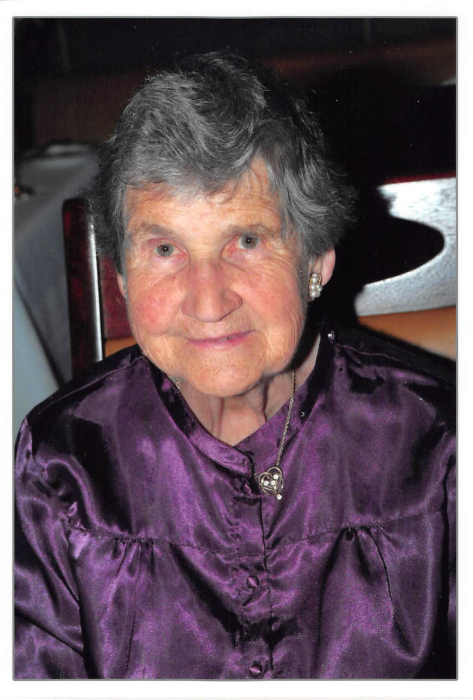 Reba Eileen Gummert, 96, of Grundy Center, Iowa, passed away on Saturday, July 28, 2018 at Arlington Place Assisted Living in Grundy Center, while under the care of Cedar Valley Hospice. Visitation will be held from 5:00 p.m. until 7:00 p.m., on Tuesday, July 31, 2018 at the Doyen-Abels Funeral Home in Wellsburg. A funeral service will be held at 10:30 a.m., on Wednesday, August 1, 2018 at St. John Lutheran Church in Wellsburg, Iowa. Following lunch at the church, burial will take place at the Trinity Lutheran Cemetery, in rural Dillon, Iowa. Memorials may be directed to St. John Lutheran Church or Cedar Valley Hospice.

Reba was born on a farm one half mile north of Green Mountain, Iowa, on March 1, 1922. She was the oldest daughter of Jethro & Laura (Yetley) McCubbin. She graduated from Green Mountain High School in 1940 and attended Iowa State Teacher’s College in Cedar Falls, Iowa. She taught for four years; three years in rural schools near Garrison and Dillon and one year in Ferguson. There she taught 5th and 6th grades.

On August 25, 1946 she was united in marriage to Donald Gummert, a World War II veteran, at the First Congregational Church in Green Mountain. Donald was the son of Wilbert & Amanda (Wolken) Gummert of Ferguson, IA. In October of 1946, Donald and Reba moved to a farm 5 miles southwest of Grundy Center in Palermo Township. After her husband’s death on July 30, 1999; Reba continued farming with her son Duane until 2010.

Reba was confirmed, November 4, 1947, and became a member of St. John Lutheran Church in Wellsburg where she taught Sunday school for 20 years. She has also sent birthday cards to Sunday school children since 1960.

She was interested in genealogy and was a member of the Daughters of the American Revolution in Marshalltown, Iowa. At the age of 80, she published “The McCubbin Family Tree 1630 – 2002”, which she had worked on for 50 years.

Reba enjoyed traveling and being a member of the New Perspectives Club. She made many trips with the group. Reba visited 46 of the 50 states including Hawaii and Alaska. She traveled to 16 foreign countries and 7 of 10 of Canada’s provinces.

To order memorial trees or send flowers to the family in memory of Reba Gummert, please visit our flower store.