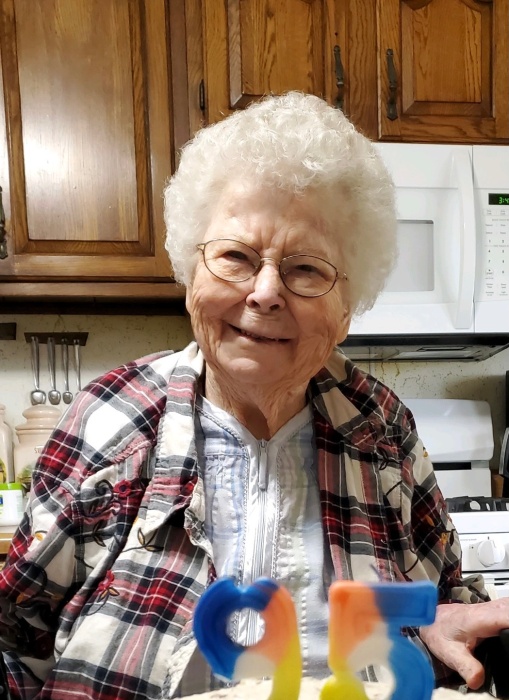 Rada Lee Diamond, 96, of Conrad, Iowa passed away peacefully on the morning of Tuesday, July 13, 2021 at Unity Point Hospital in Grundy Center under the care of Cedar Valley Hospice care.

Funeral services for Rada will be held at 11:00 a.m. on Monday, July 19, 2021 at the Community Church in Whitten, IA with Pastor Jim Hartman officiating.  Public visitation will be held from 4:00 p.m. – 6:00 p.m. on Sunday, July 18, 2021 at the Creps Abels Funeral Home located at 905 Edgington Ave, Eldora, IA 50627.  Following her services on Monday, Rada will be laid to rest at the Eldora City Cemetery.  Memorial contributions may be directed in Rada’s name to her family which will be later designated elsewhere.  For further information to leave a condolence please visit www.abelsfuneralhomes.com or call (641) 858-2181.  Creps Abels Funeral Home is caring for Rada and her family.

Rada Lee Manning was born on June 17th, 1926 in Tipton, OK.  Born to Ed and Ella (Burgess) Manning in a little country clinic.  Rada spent the next 18 years on the Manning farmstead working and picking cotton at a very young age.  She also learned her gardening skills as a young girl.  Picking many bushels of black-eyed peas.  Canning, freezing, and baking many pies and cakes.

Rada graduated from Tipton High School where she spent all 12 years. After graduation in 1944, she went to work at the Frederick, OK air base as a clerk typist until the base closed.  That’s where she met her husband, Roy Diamond of 71 years.  The couple were united in marriage on April 22, 1945 in Oklahoma.  From this union two sons were born: Don and Dave.  Roy passed away in May of 2016.  Rada made the move to Iowa in 1945 when her and Roy got married.

She lived on the Diamond Family Farm for 76 years except for a short time at Creekside Nursing Home.  Rada was known for having the cleanest garden and most beautiful flowers anywhere.  She also raised chickens and milked cows and walked plenty of bean fields in her years.  Rada was known as the “tough old gal” by all of her doctors.

She is preceded in death by her husband: Roy Diamond; parents: Ed and Ella Manning and her siblings: John, Imogene, Tommie and Rayford “Pete”.

To order memorial trees or send flowers to the family in memory of Rada Diamond, please visit our flower store.