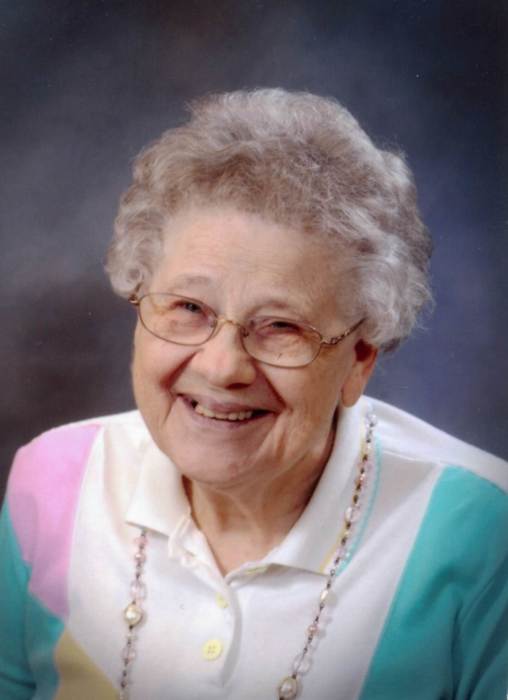 Merla J. Meester, 83, of Parkersburg, Iowa died Wednesday, October 25, 2017 at Grundy County Memorial Hospital while under the care of Cedar Valley Hospice.  A funeral service will be held at 10:30 a.m. on Monday, October 30, 2017 at Pleasant Valley Reformed Church in rural Holland, Iowa with Rev. Rick Vollema officiating.  Burial will follow at Rose Hill Cemetery in Grundy Center, Iowa.   A visitation will be held on Sunday, October 29, 2017 from 5:00 p.m. to 7:00 p.m at Engelkes-Abels Funeral Home in Grundy Center.

Merla June Krull, daughter of Ben and Mary Buseman Krull was born on June 12, 1934 at Rippley Township in Butler County, Iowa.  She received her education from Hansell Consolidated School in Hansell, Iowa where she graduated in 1952.  On March 26, 1954 she married Melvin James Meester at the Bethel Reformed Church in Aplington, Iowa.  The couple resided on their farm near Holland in which they farmed from 1955 until 1992 when they moved to Parkersburg.  The couple then moved to Grundy Center where they lived for 15 years.  Mr. Meester died on August 31, 2005.  Due to her failing health, Merla moved back to Parkersburg to be closer to her family.    Merla’s main vocation was as a homemaker and also was an Avon representative for over 20 years.  She was a member of the Pleasant Valley Reformed Church where she served for many years on the Ladies Guild.  She enjoyed ceramics, knitting and playing her piano, especially on every Sunday afternoon.

In addition to her husband Melvin, she was preceded in death by her grandson, Jacob Meester; sisters, LaVonne Aswegan and Shirley Blackmoore.

To order memorial trees or send flowers to the family in memory of Merla Meester, please visit our flower store.