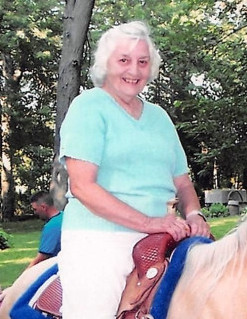 Marlys Ann Johannsen (Guelner), 95, of Reinbeck, Iowa, passed away Tuesday, September 27, 2022, at Parkview Manor. A funeral service will be held Wednesday, October 5, 2022, at 11:00 a.m. at Union Congregational United Church of Christ in Reinbeck, Iowa. A visitation will be held on Wednesday, October 5, 2022, from 10:00 a.m. to 11:00 a.m. A burial at Reinbeck City Cemetery will follow immediately after the funeral service. Memorials may be made to the family.

Marlys was born March 25, 1927, to Lillie and William Guelner in Reinbeck, Iowa. She was a lifelong resident of Reinbeck. She graduated from Reinbeck High School and shortly after married Harvey Johannsen in 1948. She worked as a housekeeper and homemaker.

In her free time, Marlys enjoyed gardening flowers, specifically geraniums, alliums, hostas, and peonies. She took immense pride in her garden, as well as her lawn, which she was very particular about. She also enjoyed birds, especially cardinals. She enjoyed baking for family and friends for the holidays and liked to watch Hawkeye basketball. She was a fierce Republican and could often be found watching FOX News. Marlys was also a lifelong member of UCC in Reinbeck.

The Johannsen family would like to extend a special thank you to Parkview Manor for their care and compassion in this difficult time.

To order memorial trees or send flowers to the family in memory of Marlys Johannsen, please visit our flower store.