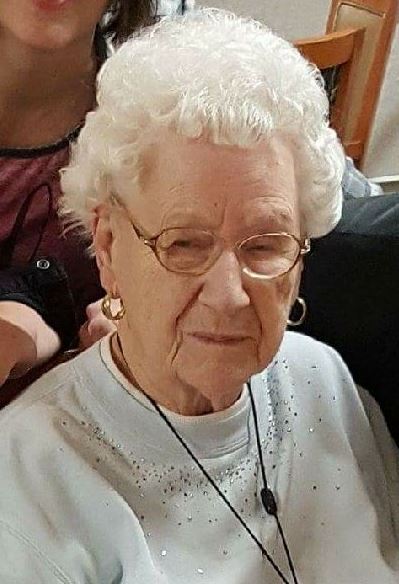 Marie Martens, 98, of Reinbeck, passed away Wednesday, October 4th, at the Parkview Nursing Home in Reinbeck, due to natural causes. The funeral service will be held on Monday, October 9th at 10:30 AM at the Amity Presbyterian Church in rural Tama County with visitation held prior to the service from 9:30 until 10:15 AM. Burial will follow the luncheon at 1:00 at the Reinbeck Cemetery. Memorials may be directed to the Reinbeck City Park.

Marie was born on August 29, 1919 on a farm in Marshall County, Iowa, to her parents George & Bertha (Thaden) Delfs. She attended school in Gladbrook, where she graduated from high school. After high school, she married Gilbert Martens at the Little Brown Church in Nashua. The couple welcomed two daughters into their family. She worked as a homemaker, caring for her family and her home. She enjoyed knitting, baking pies and was known for her Lemon and Raisin Cream Pies. She was a member of the Union Congregational United Church of Christ in Reinbeck.

To order memorial trees or send flowers to the family in memory of Marie Martens, please visit our flower store.