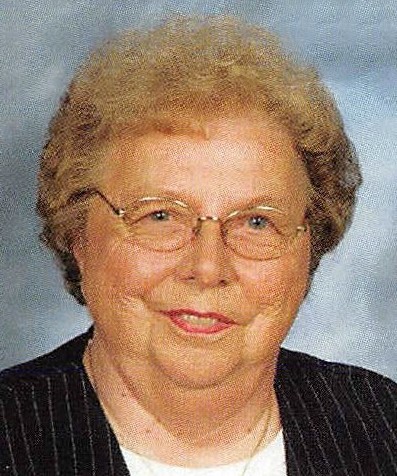 Marian Stella Everts, 88, of Wellsburg, IA passed away from cancer on Tuesday, January 18, 2022, at the Grundy County Memorial Hospital. A funeral service for Marian will be held at 10:30 a.m. on Monday, January 24, 2022, at Wellsburg Reformed Church with Pastor Zach DeWitt officiating. Public visitation will be held from 9:30 a.m. until services begin at 10:30 a.m. Following services, Marian will be laid to rest at the Wellsburg Reformed Church Cemetery.  Memorial contributions may be directed in Marian’s name to her family which will be later designated to the Wellsburg Reformed Church. Abels Funeral and Cremation Service, Doyen Chapel is assisting the family. For further information or to leave an online condolence please visit www.abelsfuneralhomes.com.

Marian Harms was born on October 5, 1933, in Wellsburg, Iowa, the daughter of Ebe and Dena (Ross) Harms. Marian attended Wellsburg Community School until the 11th grade when her father suddenly died. At this young age, Marian started working to help support her immediate family.

Marian was united in marriage to John D. Everts on September 24, 1951.  From this union, John and Marian were blessed with two children: Sharon and Timothy. John and Marian were janitors at the Wellsburg Reformed Church for over 35 years. They were also janitors at the Wellsburg School. When John retired at the school, Marian continued to work at the school for many years. Marian loved to crochet potholders for her family just like her mother did and color and sew in her spare time. But her greatest joy was being with her family and was overjoyed when she had her first great-grandchild.

It is a comfort for her children to know that Marian is with her Lord and Savior, Jesus Christ.

To order memorial trees or send flowers to the family in memory of Marian Everts, please visit our flower store.