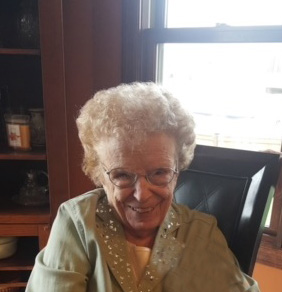 Lois M. Stewart, 91, of Eldora, Iowa died Wednesday, January 3, 2018 at Unity Point Allen Memorial Hospital in Waterloo, Iowa. A funeral service for Lois will be held at 10:30 a.m. on Tuesday, January 9, 2018 at the Eldora United Methodist Church in Eldora, Iowa with Rev. Allen C. Craft officiating.  Burial will follow at Eastlawn Memory Gardens Cemetery in Eldora.  A visitation will be held from 5:00 p.m. to 7:00 p.m. on Monday, January 8, 2018 at Creps-Abels Funeral Home in Eldora.

Lois Mae Larson was born on August 3, 1926 to Gifford and Helen (Kearney) Larson in Garden City, Iowa.  At the age of 10, she moved from the family farm near Garden City to Eldora.  She graduated from Eldora High School in 1943 and immediately attended A.I.B. Business College in Des Moines.  When she finished at A.I.B. she returned to Eldora and was employed at Cameron-Dickinson Law Firm.  In 1945, she married Marion “Jim” Stewart where the couple resided in Wilmington, Delaware for the first 10 years of marriage.  The family then moved to Eldora.  During her marriage, she was also employed at United Suppliers, Dayco and then Dr. Schafermeyer where she was secretary of the Eldora area health group.  She then worked as office manager for Dr. DeLeon and later worked for Dr. Rogers and Ruiz.  To her marriage, six children were born, Richard, Bill, Van, Cindy, Greg, and Brian.  Lois also had four step children, Maryanne, Doris, Bob and Leonard.  Her hobbies included scrap booking, quilting, cards, traveling, and she enjoyed spending time with her family, especially her grandchildren and great grandchildren.  Lois was a member of the Eldora United Methodist Church where she was active in Women’s Club.  She was also a member of the American Legion Auxiliary in Eldora.

In addition to her parents, Lois was preceded in death by her husband, Marion James; three sons, Bill, Van, and Brian; two sisters, Jean Harris and Cora Goodman; and her brother, Robert Larson.

Memorials may be directed to Cindy Stewart, 608 Douglas Avenue, Ackley, Iowa 50601 in memory of Lois.

To order memorial trees or send flowers to the family in memory of Lois Stewart, please visit our flower store.