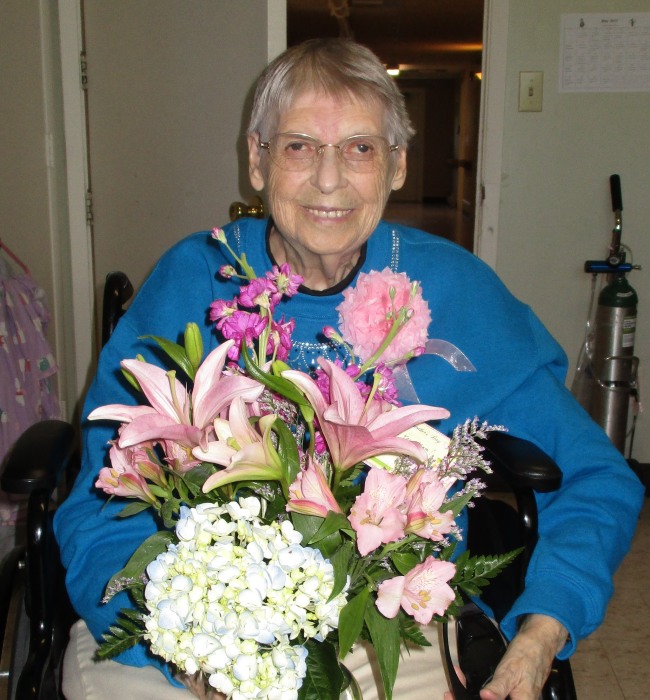 Leona M. Gray, 95, long-time resident of the Eldora area, passed away on Tuesday, June 11, 2019 at Mary Greeley Hospital in Ames. Visitation will be held from 4:00 p.m. until 6:00 p.m. on Friday, June 14, 2019 at Abels Funeral & Cremation Service, Creps Chapel, Eldora. A funeral service will be held at 1:00 p.m. on Saturday, June 15, 2019 at the funeral home. Burial will follow at Eldora City Cemetery. Memorials may be directed to the family, to later donate to local causes in Leona’s memory.

Leona was born in Clemons, Iowa on March 23, 1924 to her parents Virde and Iona (Everist) King. She was raised in the Clemons area and graduated from Clemons High School in the class of 1943. Leona was united in marriage to Robert E. Gray on December 31, 1949 at the Little Brown Church in Nashua, Iowa. Together they made their home in rural Eldora and welcomed three children into their family. Leona was a loving mother to her children and a devoted and helpful wife to her husband, especially on their farm. Later in life Robert created farm toys and Leona assisted him in that small business, which was called Pioneers of Power.

Leona is survived by her children Sharon (Jerry) Mumm of Boone, IA, Paul (Julie) Gray of New Providence, IA, and John Gray (Katy Blackmer) of Colorado City, CO; 5 grandchildren; many great-grandchildren; and many nieces and nephews. She was preceded in death by her parents; husband Robert; and brothers John, Duane & Louie King.

To order memorial trees or send flowers to the family in memory of Leona Gray, please visit our flower store.