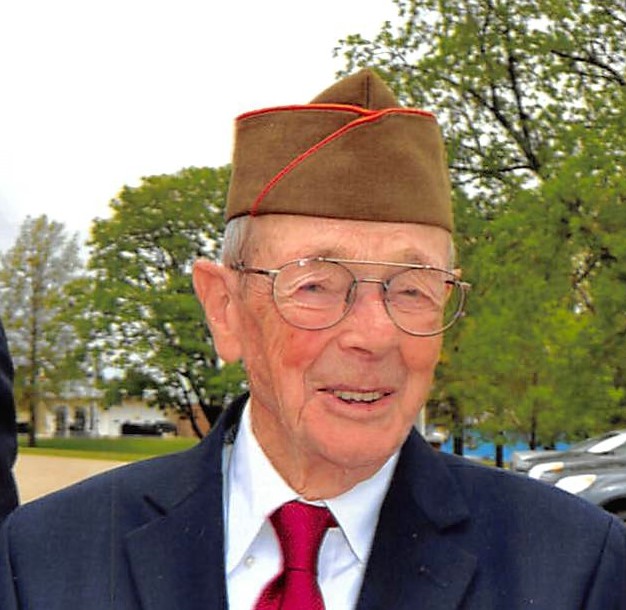 Kenneth D. Adams, 92, of Wellsburg, entered eternal life on Saturday, November 16, 2019 at Creekside Living in Grundy Center.  Visitation will be held from 4:00 PM to 7:00 PM on Friday, November 22nd at the Wellsburg Reformed Church, 617 E. 4th St., Wellsburg, IA. The funeral service will be held on Saturday, November 23rd at 10:30 AM at the Wellsburg Reformed Church. There will also be an hour of visitation at the church one hour prior to the start of the funeral service. Inurnment will held at a later date.  Abels Funeral and Cremation Service-Doyen Chapel is caring for the family.  Memorials may be directed to the family for distribution to several charities, at a later time.  Online condolences may be left for the family at www.abelsfuneralhomes.com.

Kenneth was born on July 9, 1927, to Vance Vague Adams and Velma Annetta (Smallwood) Adams in Gifford, IA  Upon turning 17, Kenneth left high school early to enlist in the United States Army during World War II.  While deployed, he served in the Aleutian Islands. Kenneth later received an honorary high school degree in recognition for his service to his country.

On October 8, 1948, Kenneth was united in marriage to Violet Mae Gelder. They spent the next 71 years together in a happy and long marriage.  His work career spanned across several industries; in addition to being a contracted painter, he also worked for many years as a machinist at Fisher Controls (present day Emerson).  In one of his proudest achievements, he owned and operated the Adams Tackle & Gun Shop in Wellsburg.

Kenneth was a longtime member of the Wellsburg Reformed Church,  a proud member of the Ashburg-Jasper American Legion Post 213 formerly in Wellsburg,  a member of the Wellsburg Historical Society, the National Rifle Association (NRA), as well as the Iowa River Conservation Club in Steamboat Rock. The Boy Scouts of America (BSA) also benefited from his generosity, as he spent 10 years as Scout Master.

To order memorial trees or send flowers to the family in memory of Kenneth Adams, please visit our flower store.