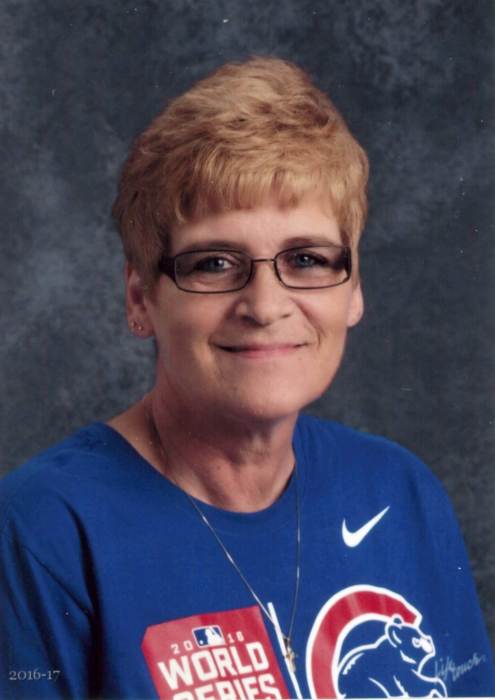 Kelly J. Patterson, 53, of Whitten, Iowa died unexpectedly at her home on Wednesday, March 14, 2018.  A funeral service for Kelly will be held at 10:30 a.m. Tuesday, March 20, 2018 at the Whitten Community Church in Whitten, Iowa with Pastor Jim Hartman officiating.  Burial will follow the service at Hauser Cemetery.  Visitation will be held at the Whitten Community Church from 5:00 p.m. to 7:00 p.m. on Monday, March 19, 2018.  Creps-Abels Funeral Home is caring for Kelly and her family.

Kelly Jean Ives, daughter of Ronald and Frankie (Hostetler) Ives was born on June 30, 1964 in Waterloo, Iowa.  She received her education from the Waterloo Community Schools, graduating from Waterloo High School.  She attended Hawkeye Community College to further her education.  On May 7, 1994 she married Steven Ray Patterson at the Whitten Community Church.  Kelly was known as the “Lunch Lady” at the Union Middle School where she worked for several years.  She was a member of the Whitten Community Church and also attended the Liscomb Church of Christ where she assisted with bible study.  Kelly enjoyed crafts, painting, scrapbooking, word puzzles and camping.

In addition to her father Ronald, she was also preceded in death by her brother, Kirk Powell and brother-in-law, Dennis Wade.

Memorials may be directed to the family for a charity of their choosing.

To order memorial trees or send flowers to the family in memory of Kelly Patterson, please visit our flower store.