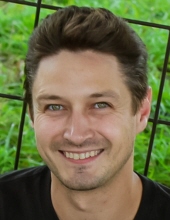 Kaleb Christofer Reents, 35, passed away on September 29, 2022.  He was born on June 11, 1987, in Barrington, IL. He was the son of Richard and Jane (Snyder) Reents. Kaleb was united in marriage to Katerina Tolchenova on September 12, 2017, in Playa del Carmen, Mexico. They welcomed 2 beautiful girls to their family, Ulyana and Amelia.

Kaleb was a 2005 Graduate of Wauconda High School and attended College of Lake County where he received various certificates and specializations in Auto Technology. He had a dream of owning his own business and he achieved this, purchasing Buffalo Grove Auto Center in August 2019, which he operated until the time of his death.

Kaleb lived life to the fullest, always joking around and having fun. He was truly a kid at heart, which made him a wonderful father and a super fun uncle. Kaleb never met a stranger, every person to him, was just a friend he had not met yet. He saw potential in people and pushed them to be their best.

He was always eager to socialize, whether spending time with family and friends, celebrating his and Uylana’s birthdays by dressing up in costumes, hosting barbeques with his “mean grilling skills” and smoked meats, drinking fine whiskey, and listening to his favorite music in the background, playing board games during holiday gatherings, or the annual go-cart races at MB2 Raceway over Thanksgiving Weekend.

Kaleb enjoyed hunting, shooting competitions with his gun club, motorcycle rides with his father, and a variety of motorcycle clubs, and snowboarding in his younger years on winter trips with his brother, sister, and cousins. He had a love for anything with a motor, including cars, motorcycles, four-wheelers, and go-carts. He helped his brother work on race cars from a young age and this enjoyment of mechanics led him to his career choice.

Above all, Kaleb will be remembered for the loving father, family member, and friend that he was. From the time he was small, his smile lit up a room. His laugh and friendly nature were truly captivating. Kaleb left us too soon and we will never understand why he felt he needed to take his own life. We want to emphasize that the last hours of his life do not overshadow the amazing life he lived and the love that his family and friends have for him.

Kaleb is survived by his wife, daughters, parents, brother, and sister-in-law Steve and Hope Meyer, sister Sarah Meyer, nephews and nieces, Britt, Olivia, William and Eliza, mother-in-law and father-in-law Andrei and Ilona Ni, sister-in-law Daria Ni and many aunts, uncles, cousins, and close friends. He was preceded in death by his grandparents Basil and Doris Snyder, Bernard and Genevieve Reents, and cousins David Hess and Jason Lindaman.

To order memorial trees or send flowers to the family in memory of Kaleb Reents, please visit our flower store.