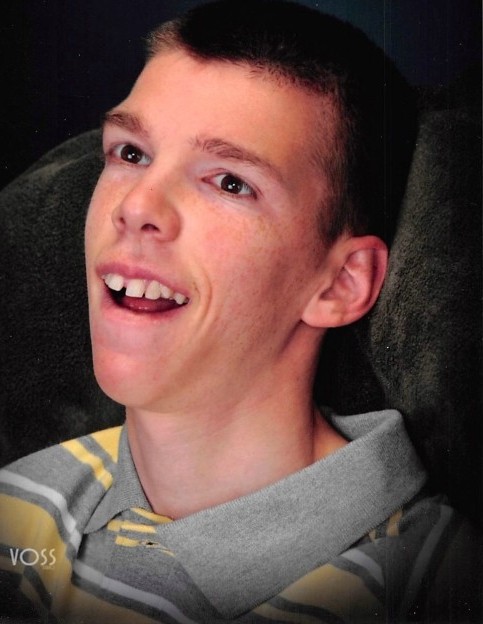 John Edwin Peters (30) of Wellsburg, Ia. went home to his Savior in heaven on April 17th at his family farm in rural Wellsburg.  His Mom, Janice, his Dad, Paul and brother, Andy were with him when he passed. Visitation will be held on Wednesday, April 21, 2021 at St. John Lutheran Church in Wellsburg, Iowa from 9:30 a.m. until time of funeral service at 10:30 a.m. Burial will follow the service at St. Paul Lutheran Church Cemetery in Rural Wellsburg. Memorials may be directed to the family.

John was born December 17th, 1990, in Iowa Falls.  He was baptized first by his Grandma Dorothy at ten days old, when a life-threatening emergency sent John  to the hospital. The incident left him permanently disabled for the remainder of his life. On April 21, 1991, John was again baptized at St. John Lutheran Church, Wellsburg, where he learned to know and love Jesus. His sister Angela was his baptismal sponsor.

John attended elementary school in Eldora and later went to River Hills school in Cedar Falls. He graduated in 2012. John was known for having the funniest jokes recorded on his DynaVox and for bringing awesome, homemade birthday treats for everyone to enjoy. John then began a program at North Star Advantage in Waterloo where he attended daily until his recent illness.

John enjoyed his life on the farm. He loved to be outdoors riding in the Gator, picnicking at the farm pond or riding in the combine during fall harvest. He liked being in the center of activity and one could often hear him laughing as his nieces and nephews gathered around his wheelchair. John spent many hours listening to music and loved to be in church on Sundays. Throughout his life, John was blessed with the enduring love of his family and dedicated care from countless doctors, nurses, therapists, teachers and aides who helped him.

John is survived by his parents Paul and Janice Peters, sister Angela (Matt) Buttjer and Andrew (Ashley) Peters, nieces Hannah and Ella Buttjer, nephews James and Owen Buttjer, niece Abigail Peters and nephew Edwin Peters as well as aunts, uncles and cousins who supported him during his life. John is preceded in death by a sister Jennifer,  by his maternal grandparents Don and Marlys Tomlinson and by his paternal grandparents Edwin and Dorothy Peters.

To order memorial trees or send flowers to the family in memory of John Peters, please visit our flower store.