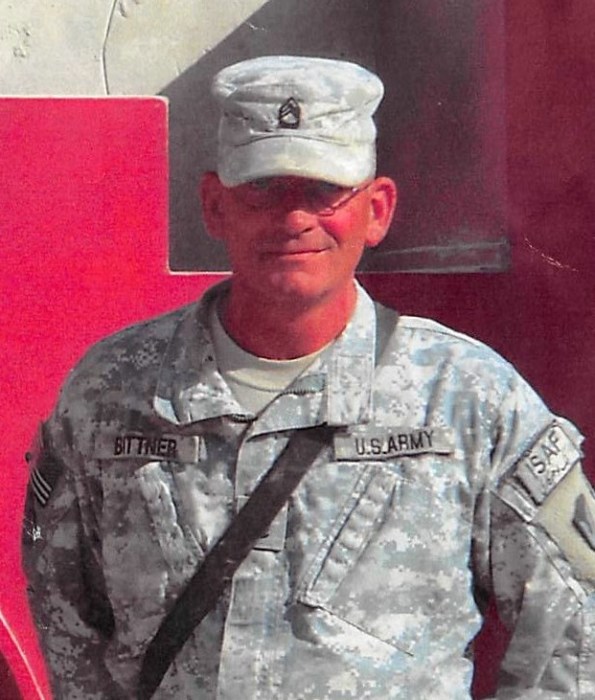 John Dale Bittner, 57, of Gifford, Iowa, passed away on Tuesday, September 4, 2018 at Unity Point Allen Hospital in Waterloo, Iowa. A visitation will be held on Saturday, September 8, 2018 at the Gifford United Methodist Church from 9:00 a.m. until time of funeral service at 10:00 a.m. Burial will follow at the Sheppard Cemetery in Union, Iowa, with military honors conducted by the American Legion-Walter-Sayer Post #182 and V.F.W. - Roll-Harless #3974. Memorials may be directed to the family.

John Dale was born on October 19, 1960 to his parents Duane and Peggy (Estes) Bittner. He was raised in Gifford and attended Eldora High School. He then enlisted in the United States Army right out of high school. John Dale found a home in the Army and made it his career. He was proud to serve his country and reenlisted in the United States Army after the September 11th attacks. He then served a year defending our country in Afghanistan, and was honorably discharged after 24 years of service.

John Dale was married to Julie Letz, and they welcomed their sons Trent and Austin into their family. John Dale and Julie later divorced.

Upon his honorable discharge from the Army, John Dale returned home to help care for family and worked as the groundskeeper for the Gifford United Methodist Church.  He loved to fish and was an avid Iowa Hawkeyes and Oakland Raiders fan.

John Dale is survived by his mother Peggy; his sons Trent (Katelyn) & Austin; brother Dewey (Deb); and many nieces and nephews. He was preceded in death by his father Duane; step-father Darrell; and brothers Randy & Phillip.

To order memorial trees or send flowers to the family in memory of John Bittner, please visit our flower store.