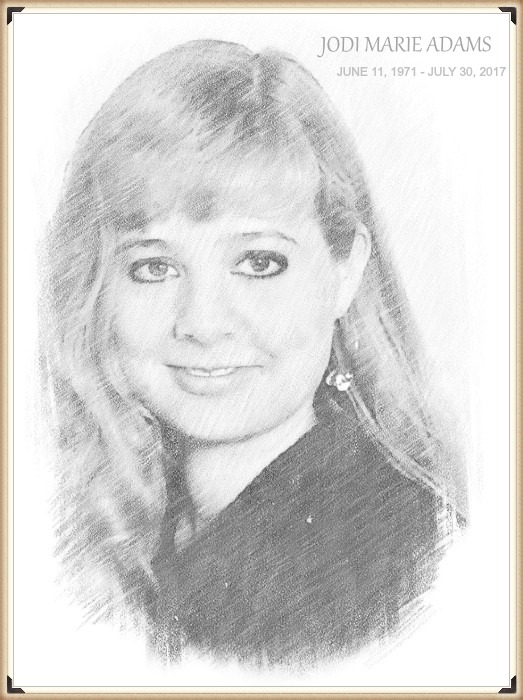 Jodi Marie Adams, 46, of Eldora, Iowa passed away Sunday, July 30th to natural causes, passing away on the 29th anniversary of her and her husband’s first date. A visitation will be held on Sunday, August 6th from 2-4PM at the Bethany Lutheran Church in McCallsburg, 50 N 3rd St McCallsburg, Iowa  . Creps-Abels Funeral Home is taking care of Jodi and her family.

Jodi was born on June 11, 1971 to her parents John and Connie Johnson. Jodi attended Colo-Nesco high school graduating with the class of 1989. On October 14, 1989 Jodi was united in marriage with Timothy Adams at the Bethany Lutheran Church in McCallsburg. Jodi spent most of her life living beside her husband Timothy and being a mother and grandmother. Jodi enjoyed many things including cooking which she was known for making Norwegian style dishes and cakes. Jodi was also an avid florist and was known for her love of flowers. Jodi was a member of the Bethany Lutheran Church in McCallsburg and was baptized, confirmed, and married there.

She is survived by her parents Connie and John Johnson of Story City (formerly of McCallsburg); her husband Timothy Adams of Eldora; children Coltin (Michelle) Adams of Colo, JT Adams of Eldora; grandchildren, Victoria Adams and Savannah Duepree; sisters Robin (Jeff) Collins of Nevada, Phyllis (Dave) Minnehan of Churdan, and Christine (Dave) Skinner of Zearing and many nieces and nephews.

To order memorial trees or send flowers to the family in memory of Jodi Adams, please visit our flower store.