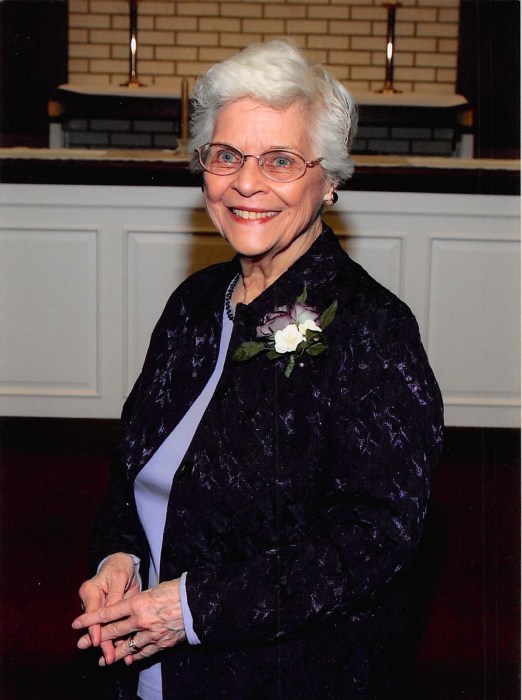 Jean Marie Evans, 94, of Grundy Center Iowa passed away on July 22, 2019, at the Grundy County Memorial Hospital.  A visitation will be held on Sunday, July 28, at Abels Funeral and Cremation Service in Grundy Center from 4 to 7 PM.  A funeral service will be held at 10:30 AM on Monday, July 29, 2019, at the Grundy Center United Methodist Church with Pastor Jerry Miller officiating. Abels Funeral and Cremation Service, Engelkes-Chapel is taking care of Jean and her family. Memorials may be directed to the Grundy County Memorial Hospital Foundation at 201 East J. Ave Grundy Center, IA 50638, or to the Cedar Bend Humane Society at 1166 West Airline Highway Waterloo, IA 50703. Online messages of condolences may be made at www.abelsfuneralhomes.com.

Jean was born on March 7, 1925, in Chicago, IL, to Ernest William and Alice Myrtle (Maxwell) Ruppelt and was united in marriage to Thomas Cooper Evans June 21, 1948, in Grundy Center.

Jean graduated from Grundy Center High School in 1942 and received a $500.00 scholarship for finishing as the runner-up in a national essay contest.  She attended college at Iowa State Teachers College (UNI), the University of Colorado, Boulder, and the University of Iowa where she earned a Bachelor of Arts degree in English.  Jean also earned a post- graduate degree in Library Science from the University of Wisconsin, Madison.

Throughout her life, Jean worked as a professional librarian and served in numerous libraries across the country as she moved as a military spouse.  Upon Cooper’s retirement from the Army, Jean returned to Iowa where she served as librarian for the Grundy Center Public Library.  She was involved in numerous community activities and events, to include playing the piano and organ and teaching Sunday School at the United Methodist Church, editing the Grundy Center centennial book, and writing and performing in the play “The Placemakers” for the town’s Centennial Celebration.  She was a long-time member of P.E.O. (75 years) and a member of the Grundy Center Woman’s Club, the Scottish Heritage Society, and the United Methodist Church.  In addition, she dedicated many years of her life to the preservation of history through her membership in the Grundy County Historical Society and the caretaker of the Herbert Quick Schoolhouse,

Jean lived life to the fullest and cherished the many friends and acquaintances she met along life’s journey.  She enjoyed the outdoors, and while at the University of Colorado she was a member of the Hiking Club and successfully climbed many of the state’s highest mountains.  An avid writer, she wrote many short stories and has had her poetic works published in every edition of the Iowa Poetry Association’s Journal since 1969. Jean was an avid reader and collector of books.  She loved music, and in addition to playing for the church she played several instruments and was a member the Scottish Highlanders at the University of Iowa where she played the bagpipes.  Jean loved animals, and during her lifetime she had several dogs and cats.  She also loved to travel with the Elderhostel Program, and took many photographs which she compiled into slide shows which she presented to students and civic organizations.

Jean is survived by her children; James (Beckie) Evans of Downers Grove, IL, Charles (Linda) Evans of Smithville, MO, her sister Judy (Austin) Fernow of Grundy Center, seven grandchildren and numerous nieces and nephews.  She was preceded in death by her parents, husband Thomas Cooper, and an infant son, Edward Giles Evans.

To order memorial trees or send flowers to the family in memory of Jean Evans, please visit our flower store.