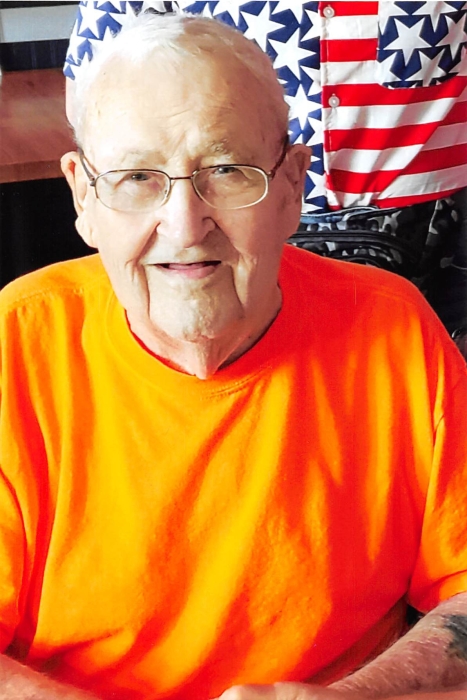 Jim Bienfang, 90, passed away peacefully at Creekside in Grundy Center on Monday, September 30, 2019, surrounded by his loving family. Visitation will be held on Friday, October 4th from 5-7 pm at Abels Funeral Home in Grundy Center and a private family inurnment will take place on Saturday, October 5th at 10:00 am with military honors conducted by Grundy Center American Legion Post 349 and AMVETS 17. Following his wishes, there will not be a service, but well-wishers are encouraged not to mourn his passing, but celebrate good times with good friends.

James (Jim) Richard Bienfang was born on November 3, 1928 in Grundy Center to Elgin (“Buster”) and Ivadean (Schuck) Bienfang. Jim graduated from Grundy Center High School in 1946. Shortly after graduation, he was in the U.S. Army serving as a Mechanical Technician and served proudly in World War II. When he returned home, he was a member of the AMVETS 17. Jim and Anna Mae Schoolman were united in marriage on September 7, 1951. She passed away on October 9, 2008. To this union were born three children, Vanda, Jay, and Scott.

Jim wore many hats in his career, as a rural mail carrier, working for the ASC office, as well as owning and operating several establishments including Jim’s Jolly Joint and the Bee Bar. Jim was known for his jolly personality making any night spent on a bar stool memorable. His demeanor brought energy to the atmosphere which was a priceless gift.

Jim was given the gift of life and he took many opportunities to give it back. From donning a Santa suit and handing out quarters at Christmas to buying a winter coat for a neighborhood child who didn’t have one, Jim was selfless and kind to a fault. Even though his friends and family had the opportunity to witness many acts of random kindness, we know there are many lives he touched in ways we’re not even aware of.

Never one to sit still for long, Jim was always working on a project; he and his brothers and/or sons tore down and built many buildings in town. Most notably, he bought and demolished the old Columbia Hotel and built a house and business at the corner of G Ave and 8th St. The home was designed so that Anna Mae could look out the window and see all the activity downtown. The bar was designed so he could care for Anna Mae just next door.

Jim was an exceptional caregiver to Anna Mae. He was devoted to her happiness, and he even took out an ad in the local paper encouraging kids to stop by their house on Halloween because it would bring so much joy to Anna Mae seeing them in costume.

After Anna Mae passed, Jim spent many hours sitting at his desk, listening to music and supervising all the comings and goings around town. He enjoyed siting on the bench at the Courthouse, traveling, sweet corn in the summer, roast beef dinners on Sunday, rum & Coke, dogs, and working at the farm. More than anything, he enjoyed the company of his friends and family, usually playing cards at Scotty’s or entertaining kids and grandkids at home.

Nearly everyone that knew Jolly Jim had a funny, and sometimes wildly inappropriate, story to tell about him. Sometimes, he was “just along for the ride,” but more often it was all his idea. His kids will tell you he was adventurous (not always a great idea, but…) and always looking for an opportunity to help others. But above all, he was a loving and caring father; the best thing he did for them was modeling gentle and unconditional love for their mother.

Even in his last days, when asked how he was doing, Jim always gave the same answer, “I’m fine – thank you very much.” His kind heart and gentle soul defined him as a man and loyal friend. His funny pranks, tenacity, and penchant for pushing boundaries defined his colorful character.

If you were lucky enough to know Jim, you were likely blessed by his quick-witted humor, his blunt sensibility, or his extravagant kindness. Although he didn’t amass a fortune or have a building named after him, he left a vast and rich legacy that reaches far beyond his years on this earth. He taught us that greatness is not what you have, it’s what you give.

In lieu of flowers and memorials, the family wishes for others to share random acts of kindness in Jim’s memory.

To order memorial trees or send flowers to the family in memory of James Bienfang, please visit our flower store.