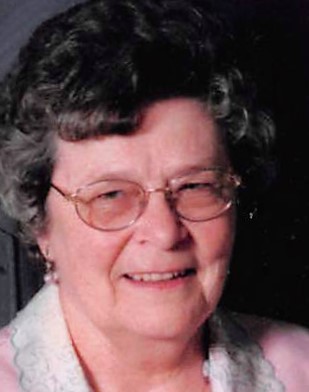 Irene Strickler, 88, of Grundy Center, entered into eternal life on Thursday, January 30, at Creekside in Grundy Center.  A funeral service will be held on Thursday, February 6, at 10:30 AM at the United Methodist Church in Grundy Center. There will be an hour of visitation from 9:30-10:30 AM at the church, prior to the start of the funeral. A private family burial will follow the service.  Memorials may be directed to the family who will spread them among several charities at a later date.  Abels Funeral and Cremation Service-Engelkes Chapel is caring for Irene and her family.

Irene was born on September 7, 1931, to Orren and Edna (Simmons) Mussett of Waterloo, IA.  She attended Waterloo East High School, graduating with the class of 1949.  On September 23, 1950, she was united in marriage to Donald Strickler; they had a long and loving 59 years of marriage prior to Donald’s passing in 2010.

Irene was an extremely organized and hard worker who spent many hours working with Donald on their farm.  She and Donald always enjoyed hosting family events at the farm. Her faith was an important part of her life and as a result, Irene was an extremely active member of the United Methodist Church in Grundy Center.  Her roles ranged from Sunday School Teacher, to church treasurer, to Helping Hands volunteer.

Irene was also an avid reader and in her younger years, she golfed every Tuesday with three other lady friends. Later in life, Irene also spent a great deal of time volunteering at the Grundy County Memorial Hospital. Despite her many responsibilities and hobbies, Irene was always there to show love and support to any family member whenever they needed it.

To order memorial trees or send flowers to the family in memory of Irene Strickler, please visit our flower store.
Open