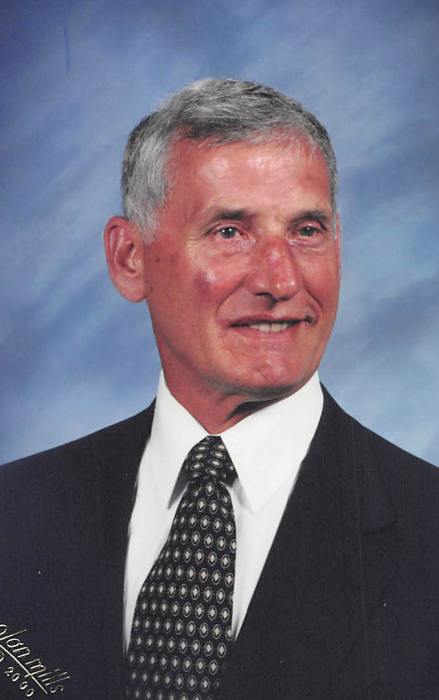 Harold “Harry” Dole, age 89, died on Friday, June 24th. He passed peacefully in his home, surrounded by his loving family. Visitation will be held on Tuesday, June 28, 2022, from 4:00 p.m. until 7:00 p.m. at the Grundy Center High School, Main Gymnasium; and on Wednesday, June 29, 2022, from 9:30 a.m. until the time of the Mass of Christian Burial at 10:30 a.m. at St. Gabriel Catholic Church in rural Reinbeck. A fellowship will follow the mass and then there will be a private burial at Rose Hill Cemetery in Grundy Center. The family of Harry is eternally grateful for the remarkable care he received over the past month from the Iowa City VA Hospital, Creekside Care Center, and Care Initiatives Hospice. Memorials may be directed to family, which they are using to establish a scholarship in Harry's memory.

Harold Dean Dole was born in Eldora, Iowa on June 23, 1933, to parents Joe and Susie (Reed) Dole. He was the seventh of what would be eleven Dole children. Harry graduated from Hubbard High School in 1951. In January of 1953, he enlisted in the Marine Corps and served fifteen months in Korea. After his military service, Harry attended Ellsworth Jr. College where he played baseball and basketball. In 1958, he went on to Iowa State University, graduating in 1961. On August 22, 1959, Harry married Jean Weltha of Roland, Iowa. They celebrated sixty-two years together and had four children: Lisa, Joe, Jeff and Kerri.

Harry found his calling in education. He earned his Bachelor’s Degree in math and secondary education from ISU and his master’s in secondary administration from UNI. His professional career began in Denver, IA from 1961-1967 and finished in Grundy Center from 1967-1995. Over the course of his thirty-four years in education, Harry taught high school math, coached basketball, baseball and nearly every other sport, served as athletic director, and finally as high school principal for the last twenty-two years. He had high expectations for his staff, students, and himself, emphasizing integrity and personal responsibility, and always inspiring others to be their best selves. Many of his former students and colleagues will remember him walking the halls of GCHS with a toothpick in his mouth, jingling his keys, and whistling a jaunty tune, always wearing a suit and tie.

Harry loved the community of Grundy Center. He was a charter member of the local Kiwanis Club, chaired the Centennial Committee, and was former president of the Senior Citizens Housing Board. He happily volunteered wherever he was needed.

Harry is well-known for his love of athletics.  As Jean loves to say, “First he played every sport, then coached every sport, then officiated every sport.” He was voted Outstanding Athlete at Ellsworth College and later inducted into their Hall of Fame. A longtime sports official for football, basketball, baseball, and track, he was honored by the Iowa High School Athletic Association for his forty-one years of officiating. Harry was a competitive golfer and loved playing with his children, grandchildren, and especially with Jean in husband and wife tournaments until he was no longer able. Perhaps most of all, Harry loved fishing in Canada with his beloved group of friends, which he did for more than thirty years.

More than anything else in his life, Harry was proud of his family. He was a devoted son, brother, and uncle and a cherished husband, father, and grandfather. He will be greatly missed by his wife Jean of Grundy Center, his four children Lisa Dole of Iowa City, Joseph (Sondra) Dole of Groveland, IL, Jeff (Shannon) Dole of Grundy Center, and Kerri (JB) Barnhouse of Iowa City; his nine grandchildren Zachary Dole, Blake (Ellie) Dole, Wesley Dole, Brianna (John) Hall, John (Meghan) Schwind, Isabella and Delaney Dole, Jane and Charles Barnhouse; his seven great grandchildren, Rowan, Oliver, Briggs, Theodore, Jocelyn, Rylie and Genevieve; his sister Patricia Lofquist of Illinois, and countless nieces and nephews.

Harold is preceded in death by his parents Joe and Susie, his brothers Fred, Richard, Bill, Lee, Glen, and Larry, and his sisters Helen, Ruth, and Marilyn.

To order memorial trees or send flowers to the family in memory of Harold "Harry" Dole, please visit our flower store.