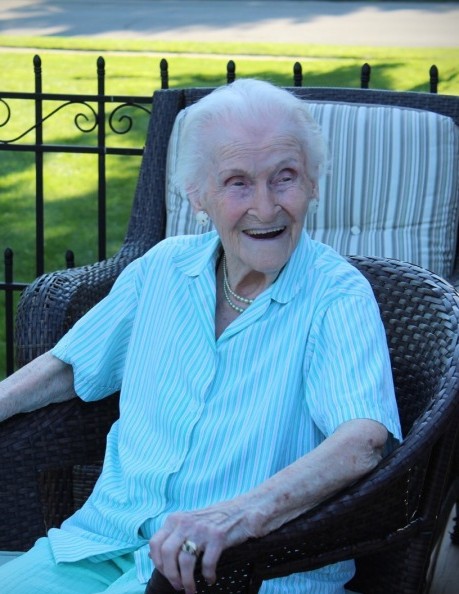 Gladys Nadine (Clark) Higgason, 100 years young, of Eldora, passed away on Sunday, August 18, 2019 at Eldora Specialty Care in Eldora. The funeral service for Gladys will be held on Thursday, August 22nd at 10:30 AM at the First Congregational United Church of Christ in Eldora. Visitation will be held one hour prior to the service at the church. Inurnment will be held privately at a later date at the Eastlawn Cemetery in Eldora. Memorials may be directed to the family.

Gladys was born on January 15, 1919, in St. Anthony, Iowa, the daughter of Clyde & Minnie (McPherson) Clark. She proudly graduated as Valedictorian of her class and married Max Higgason, Sr. of Eldora on October 1, 1937. They were married for 70 blessed years, before he passed away in 2007. Together, the couple welcomed three sons into their family. Gladys stayed home and cared for her family for many years but worked several jobs in the area throughout her life. Gladys was able to live in her longtime home in Eldora, just up until the week before her passing.

She was a member of the First Congregational United Church of Christ in Eldora and was a past member of Eastern Star. Gladys never kept idle hands. She was a wonderful seamstress, making most of her children’s clothing when they grew up. She loved to crochet but when arthritis took her away from this favorite hobby, she took up knitting. At age 70, Gladys learned to drive! A proud moment for her, her family describes. She loved being active, taking many walks around Eldora. What brought the most joy to Gladys was her family. Family was everything to her. They have many fond memories of her, a soft heart, yet firm, especially raising young boys. Her family will cherish all the memories they made with her, her century long life leaving a huge legacy.

To order memorial trees or send flowers to the family in memory of Gladys Higgason, please visit our flower store.
Open