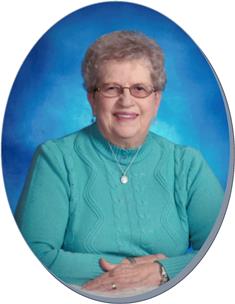 Frances “Fran” N. Lage, 83, of Grundy Center, passed away unexpectedly on Monday, June 24, 2019 at the Grundy County Memorial Hospital in Grundy Center. The funeral service for Fran will be held on Friday, June 28th at 10:30 AM at the United Methodist Church in Grundy Center. Visitation will be held one hour prior to the service at the church. Following the funeral service, lunch will be served, where we will leave in procession at 12:30 for the interment at Maple Hill Cemetery in rural Gladbrook. Memorials may be directed to the family and memories or messages of condolence may be left for the family at www.abelsfuneralhomes.com

Fran was born January 10, 1936, in Tama County, Iowa, 1 mile west of Lincoln, to her parents William & Naomi (Bergles) Kuehl. She attended school in Gladbrook and on March 8, 1953, Fran was united in marriage to Elmer Lage at the Salem Church of Lincoln. The couple were blessed with three children, where Fran stayed home and raised her children and worked alongside her husband as a loyal farm wife. After her children were grown, Fran went on to work for Plastronics and then at Hooks Grocery Store, both in Grundy Center. She later began her food service career as the kitchen manager at the Grundy County Memorial Hospital in Grundy Center and later at Beverly Manor (Grundy Care Center), where she retired.

She enjoyed sewing and crocheting, including many beautiful Christmas ornaments she proudly displayed. Fran also enjoyed flowers, baking cookies, camping and fishing, and bus bank trips with her husband, her favorite travel stop in Branson, MO. Fran enjoyed spending time with her family and after the death of her husband Elmer, coffee with her friends in the morning became a highlight of her day. Although she left this world too unexpectedly, it brings her family comfort all the memories they made with her along the way.

To order memorial trees or send flowers to the family in memory of Frances Lage, please visit our flower store.
Open