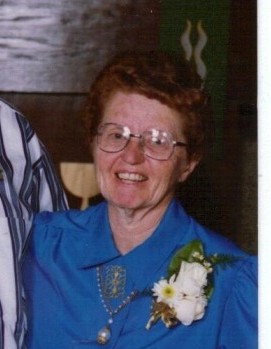 Emma was born on May 8, 1929 in Grundy County, Iowa on the family farm, to her parents Martin & Susie (Swygman) Henze. She grew up in Grundy County, and attended school in Dike, where she graduated high school from. As a young child, she met and became friends with her future husband Reinhard Kalkwarf, in which she often told stories to her family and friends how he saved her a seat on the school bus. The rest was history and Emma and Reinhard started their forever love story on August 31, 1950, at the Salem Lutheran Church, in rural Parkersburg. The couple welcomed 5 sons into their family, in which Emma stayed home and raised her boys, and took care of their home. In her free time, she was very active in their church, where she spent hundreds of hours quilting with her church family. Later in life, Emma and Reinhard learned to square dance and could often be found dancing with her sister and brother-in-law.

She enjoyed playing cards, and lots of fun and laughter was had with her family. Her family described her as happy, and always laughing. Even up until she passed away, she was still her ‘spunky’ self. Her family will miss her dearly but know she’s happy to be reunited with her family and friends in Heaven.

To order memorial trees or send flowers to the family in memory of Emma Kalkwarf, please visit our flower store.
Open