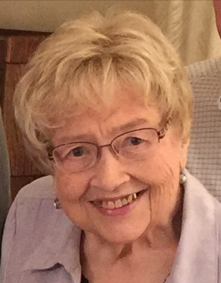 Elsie Jean was born on December 13, 1937 in Lake Charles, Louisiana, the daughter of Bruce & Jean (Steadman) Brockway. Elsie Jean and her family relocated to Grundy Center in the late 1940's, after her father's service in the military. She attended school in Grundy Center, graduating with the Grundy Center High School class of 1955. On November 3rd 1956, Elsie Jean was united in marriage to Everett Wilson at the First Baptist Church in Grundy Center. She and Everett were overjoyed to welcome son Edwin into their family. For 37 ½ years, Elsie Jean worked as an Administrative Assistance for the Grundy County Iowa State Extension Office.

Elsie Jean had a love for music. For many years, she served as the church choir director at the First Baptist Church in Grundy Center and later as the bell choir director and choir member at the First Presbyterian Church in Grundy, where she was a current member. Elsie Jean also spent many years with the Waterloo Metropolitan Chorale. She was known for sending cards to her family and friends, whether it was for their birthday or anniversary or other special occasion. Elsie will be dearly missed by her family and friends she leaves behind.