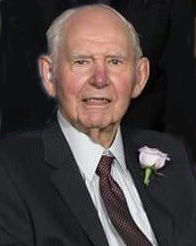 Edward R. Harms (85) of Aplington, Iowa, passed away on June 25th, 2016 at Grundy County Memorial Hospital Long Term Care while under the care of Cedar Valley Hospice, and in the presence of his loving family. A public visitation will be held at the Doyen-Abels Funeral Home in Wellsburg, Iowa, on Tuesday June 28th, 2016, from 5:00 pm until 7:30 pm. Memorial services will be held at 10:30 am on Wednesday, June 29th, 2016 at the Wellsburg Reformed Church. Memorial contributions can be made to the family to be designated at a later date. For questions, call: 319-824-3319 or visit: www.abelsfuneralhomes.com. Engelkes Abels Funeral Home is caring for Ed and his family.


Edward Harms was born to Remmer and Ida (Haan) Harms on July 1st 1930, in rural Butler county. He was raised and educated in the area, attending school at a country school in Butler county. On November 28th, 1952, Ed and Anna Ohling were united in marriage at the Wellsburg Reformed Church. Together the family made their home near Aplington to raise their family. In February of 1952, Ed enlisted in the United States Army. He would serve his country during the Korean conflict until his honorable discharge in 1954. Edward was a farmer who enjoyed woodworking. He would later go on to build furniture and playhouses for his grandchildren. He was a member of the Wellsburg Reformed Church, Interfaith Men's Chorus and the Aplington Amvets. Ed also served as a Deacon and Elder on the Wellsburg Reformed Church consistory.