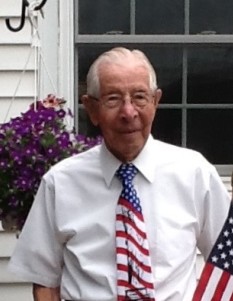 Donald “Don” Raymond Rhoades, lifelong Reinbeck resident, passed away at the age of 100 at the Parkview Manor in Reinbeck on Wednesday, May 02, 2018. Memorial visitation for Don will be held on Friday, May 4th from 4:00 to 7:00 PM at the Union Congregational United Church of Christ in Reinbeck. The memorial service will be held on Saturday, May 5th at 10:30 AM at the church. Inurnment will follow services at the Reinbeck Cemetery with military honors performed by the Reinbeck American Legion Post #242. Memorials may be directed to Parkview Manor, 1009 Third St., Reinbeck, IA 50669 or to Sunrise Hill Care Center, 909 6th St., Traer, IA 50675.

Don was born on March 5, 1918, at his family’s home to his mother Lena Willer. Lena raised Don and his sister in Reinbeck, where he attended school, graduating from Reinbeck High School in the class of 1938. He was very active in basketball, football and track-even setting a track record that could not be beat for 23 years!

On October 7, 1939, Don was united in marriage to June Lapham at the First Presbyterian Church in Waterloo. Shortly after the two were married, Don and June welcome 2 children into the family while Don had been overseas serving in the United States Navy with the Seabees. He served in Okinawa, Japan and later returned home after his honorable discharge, welcoming 3 more children. After returning home from the Navy, Don began farming, working part time at Voorhies Grain and later began his career in the printing business, working at Hawkeye Corrugated Box Company; he retired after 27 years of service. In his later years, he worked at Truncks Country Foods in Reinbeck.

While working at Voorhies Grain, Don joined their basketball team, where he played competitively. He loved sports and loved to watch the Gladbrook- Reinbeck kids of all ages play many different sports. He enjoyed being around the people of Reinbeck, and was a 'Salt of the Earth Man'. He simply enjoyed the company of others and being active in his community. In his last 2 years, his transition to Parkview Manor was enjoyable, thanks to the wonderful staff there that he adored.

In his younger years, Don enjoyed going out dancing with his wife June. He also enjoyed fishing, golfing, being a part of the Oak Leaf Country Club and was an avid Iowa Hawkeye fan. He especially loved his family and being around his grandchildren, helping them in any way that he could. Don was proud to be a lifelong member of Reinbeck and often referred to his hometown as “God’s Country”. His family will miss him terribly but their memories of his long life bring them comfort and one particular memory the family will never forget was his favorite line, “Save your money and buy a farm.”

To order memorial trees or send flowers to the family in memory of Donald "Don" Rhoades, please visit our flower store.
Open