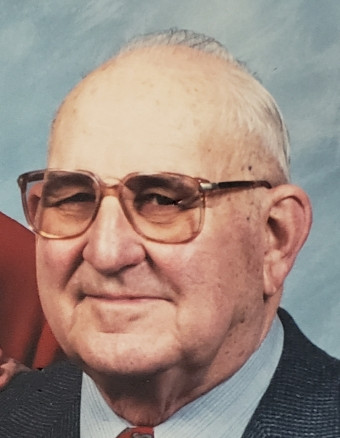 Donald Tscherter , age 99 of Reinbeck, IA formerly of Sioux Rapids, Iowa passed away on Thursday, August 25, 2022 at Parkview Manor Senior Living Center in Reinbeck, IA.  A visitation will be held at Abels Funeral and Cremation Service-French-Hand Chapel in Reinbeck, IA from 3-5 pm on Tuesday, August 30th.  A Celebration of Life Service will be held at the Sliefert Funeral Home in Sioux Rapids, IA at 11 am, Wednesday, August 31st with visitation one hour prior to services.  Burial will be immediately following services at Lone Tree Cemetery in Sioux Rapids with full military honors.

Don was born June 26, 1923 in Pocahontas, IA to John and Ruth Tscherter.  He graduated from Pocahontas High School in 1940.  Don joined the Armed Forces and served in Word War II stationed in Italy.  After being discharged he married Genevieve (Jennie) Hall in 1945.  From that union six children were born, Steve, Cathy, Roger, Donna, Jeff and Nancy.  They later divorced.  Don married Estella Burris in 1966.

Don was a member of Riverside Evangelical Free Church in Linn Grove.  He was a proud member of the Lions Club in Peterson, IA and the American Legion.  In Don’s younger years he enjoyed refereeing and umpiring basketball and baseball games.   He also enjoyed being a spectator at his great grandson’s games once moving to Reinbeck.  Don retired from Farm Services after hauling farm chemicals for many years.

Don was preceded in death by his parents, wife Estella, brother Jim and his children, Steve (and wife Carol), Roger and Jeff Tscherter and Donna Johnson.

In lieu of flowers, donations may be made to the Peterson Lions Club.

To order memorial trees or send flowers to the family in memory of Donald Tscherter, please visit our flower store.