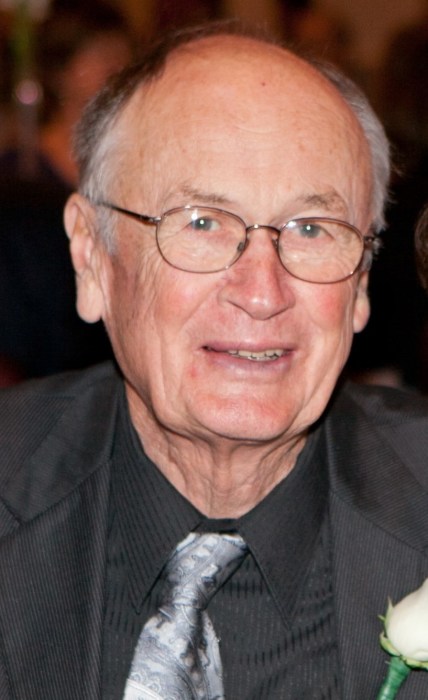 Dale Edward Larsen, 86, of Cedar Falls, formerly of the Gladbrook/Reinbeck area, passed away of natural causes, on Saturday, June 1, 2019 in Cedar Falls, Iowa.  Memorial visitation will be held from 4:00 p.m. until 7:00 p.m. on Friday, June 7, 2019 at the Salem Church of Lincoln, 110 Pershing, Lincoln, Iowa 50652.  A memorial service will be held at 10:30 a.m. on Saturday, June 8, 2019 at the Salem Church of Lincoln.  Inurnment will follow at Maple Hill Cemetery in rural Gladbrook.  Memorials may be directed to the family, to later donate to local causes in Dale’s memory.

Dale was born on March 19, 1933, at the family farm in Grant Township, Northeast Tama County, Iowa to Thorvald (Toby) and Helen Peper Larsen.  He attended country school where he sometimes walked one mile north through 5th grade, then graduated from Reinbeck High School in 1951 as Vice President of his class.  Dale was active in basketball, football, played the saxophone in Jazz Band and occasionally the accordion.  He was a 4-H member, showing hogs and eventually held many leadership positions to support Iowa 4-H and Tama County.

Dale met Janice Lynch, his future wife, at Corn Carnival and later heckled her at a basketball game, where he asked for a date after the game.  She declined.  A few days later a letter was sent from Dale asking Janice for a first date.  Persistence paid off as they were married on November 18, 1951. They enjoyed 67 ½ years of wonderful life adventures together, which included two very caring sons and their wives, three much-loved grand-daughters and husbands, and five special great grandsons.

Dale’s “deep love of the land” was expressed in his farming operation starting in the 1950’s.  He welcomed new trends in contouring, minimum tillage, and later no-till farming.  Dale started developing his custom weed spraying business and would joke about spraying thousands of acres from Hudson to Green Mountain, and from Grundy Center to Traer!  Dale farmed their Century Farm, raising crops, cattle, hogs, and chickens

Between raising their two boys and the farming business, Dale also devoted much of his time to the community.  He served as Board of Directors and President of the Tama Co. Fair Association, leading many efforts for renovations of the Tama County Fairgrounds.  This included new showers and restrooms, show ring, and food cafeteria.  Dale was later honored as “Friend of the Fair” at the Tama County Fair for his dedication and support.  Dale was an active volunteer with the Gladbrook Lions Club, Gladbrook Masonic Lodge #436, Tama County Cattleman’s, Tama County Farm Bureau, President of Tama County Pork Producers, served on the Board of Directors for the Lincoln Co-Op Oil Company when they merged with the Lincoln Grain Company, and Church Board President at Salem Church of Lincoln.  Dale and Janice also enjoyed golfing at Conrad, learning to downhill ski (carefully), and playing cards with friends often meant a FUN evening.  Attending Broadway shows or musicals was also on their entertainment list.  Throughout the years they hosted two foreign exchange students, one from the Netherlands and one from Zimbabwe.

Following his retirement, Dale and Janice moved to Cedar Falls, Iowa, where he served as President of the Pointe West Condo Associations Board and was involved with several improvements to the pond and grounds. He was often seen at the local Starbucks for morning coffee, sometimes multiple times a day.  Dale and Janice enjoyed traveling, including trips to Europe, a canal boat cruise in England, visiting Brent in Russia, and Kipp in Barbados.  Dale and Janice spent their winters in Arizona with frequent visits from friends and family.

Some of Dale’s greatest joys were attending his sons and granddaughters’ activities. Dale enjoyed farming with Kipp and having Brent help with annual harvest, as well as daughter-in-law, Nancy running the combine.  He was also known fondly as “Pester”, by his three grand-daughters.  He enjoyed taking them to piano lessons, pushing them outside on the tire swing, and looking for fox holes while they joined him in the tractor.

Dale was preceded in death by his parents and several aunts and uncles.  Dale Edward Larsen was a kind, thoughtful man with an intense work ethic. He treasured any time spent with his family and will be greatly missed. We can share and write forever about how much Dale impacted our lives, but as Dale would say, “Come over here for a big Bearcat hug!”  He did build solid life steps for his family to climb.

To order memorial trees or send flowers to the family in memory of Dale Larsen, please visit our flower store.