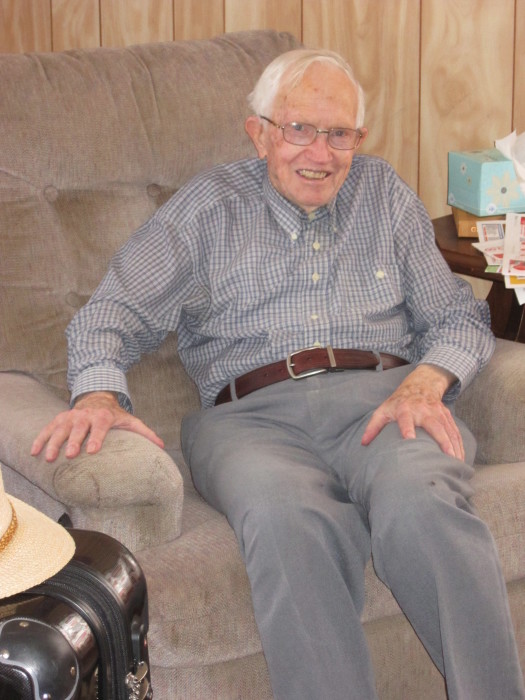 Clarence Henze was a man who was many things to many people.  My sister and I were lucky enough to be able to call him Dad.  He was born on February 17th, 1925, the sixth child and third son of August and Gepka Van Deest Henze in Comfrey, Minnesota.  In 1928, Clarence came to Grundy County with his parents and siblings to Holland, Iowa.

For most of his life he was a farmer.  As a young man he helped on the farm with his brothers and sisters, remaining on the “home place” even after his parents retired and moved to Grundy Center.  When a nearby farm became available, his father asked him and his brother Ernest if they would agree to stay and farm the additional land, if he purchased it.  The young men agreed, and it was on this second farm, that after he married, Clarence Henze lived until he moved into Arlington Place a few years ago.

He married Adeline Bottema in 1953, and settled into their house on what is now L Ave.  It was from there that he also managed the “Good News Quartet”.  The quartet started with a group of local men, that later also included a piano player from Texas.  They toured all over the Midwest, and sold LP’s as part of their tours.

In addition to farming, he also worked in construction on the paving of the road that runs north and south on the east side of Wellsburg, and later the Grundy Center High School when the addition was built in the 70’s.  When that was completed, he decided to bid on the job as “Sanitary Landfill Engineer”.  His bid was accepted, and so, for the next stage of his life, he ran the Grundy County Landfill.  One of his favorite stories was about how someone would say “Hello, Clarence” to him and my mom when they were out together.  He would return the greeting, and when the person walked away, my mother would ask him, “Who was that?”  My Dad would think for a minute, and then reply, “I have no idea, but I know he drives a red pick-up!”

He was actively involved in the Christian Reformed Church in Holland for many years until it was dissolved, and since then has been a member of the Orchard Hill church in Grundy Center.

He was a man who loved a good story, and a good joke, even more.  He enjoyed travelling, venturing as far west as California, and as far east as Germany.  He was generous with his time and resources, and often said that he had made a lot of mistakes, but that God blessed him anyway, and that is what had made the difference.

He will join his parents, his wife, his dear friend Irene Stout, and all of his siblings beyond the gates of Heaven:  Jeanett Meester, George Henze, Sophia Muller, Ella Meints, Ernest Henze, and Julia Muller.  A set of triplets born to his mother, one unnamed brother, and two sisters, Susie and Lena, will also meet him there.

To order memorial trees or send flowers to the family in memory of Clarence Henze, please visit our flower store.