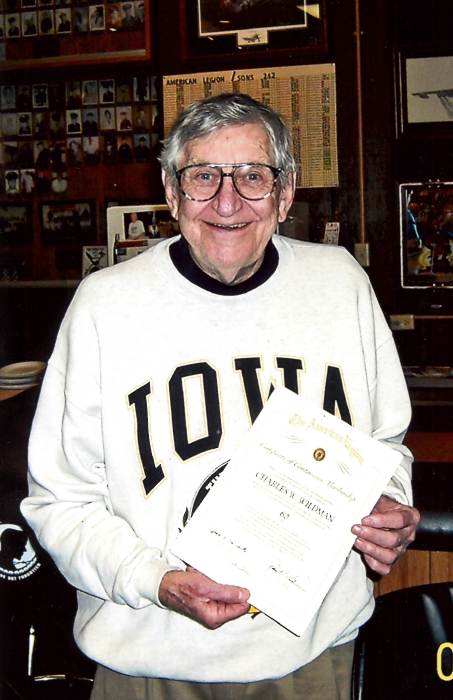 Charles W. Wildman, 88, of Reinbeck, Iowa passed away Thursday, April 12, 2018 at the Grundy County Memorial Hospital in Grundy Center, Iowa.  A memorial service for Charles will be held at 11:00 a.m. on Saturday, April 14, 2018 at the United Methodist Church in Reinbeck, Iowa.   A visitation will be held at the church on Saturday beginning at 9:00 a.m. until the time of service.  French-Hand Funeral Home is caring for Charles and his family.  Memorials may be directed to the Alzheimer’s Association in memory of Charles Wildman.  Messages of condolence may be made to the Wildman family at www.abelsfuneralhomes.com

Charles William Wildman, son of Dale and Gail (Fleener) Wildman was born on March 30, 1930 in Lynnville, Iowa.  He graduated from Greene High School in Greene, Iowa in 1948.  Following graduation, he honorably served in the United States Navy during the Korean War.  On January 24, 1953 Charles married Barbara Joan Stock at the Country Church in Petosi, Missouri.  The couple made their home in Reinbeck.  Chuck was in partnership for several years at Kelly’s Hardware and Furniture and then owned and operated Robert Dale Furniture both in Reinbeck.  He also was a realtor and trainer for Century 21 Realty in Waterloo where he conducted training for realtors in seven states.  In retirement, Chuck pursued his hobbies which included golf, hunting, fishing, photography and playing cards.  He was a member of the American Legion Post #242 of Reinbeck and participated in an Honor Flight to Washington, D.C. with his good friend Mark Burdick.

In addition to his parents, he was also preceded in death by his brother, Bob Wildman; two sisters, Shirley Johnson and Louise Iliff; and son-in-law, Roger Hudson Sr.

To order memorial trees or send flowers to the family in memory of Charles Wildman, please visit our flower store.