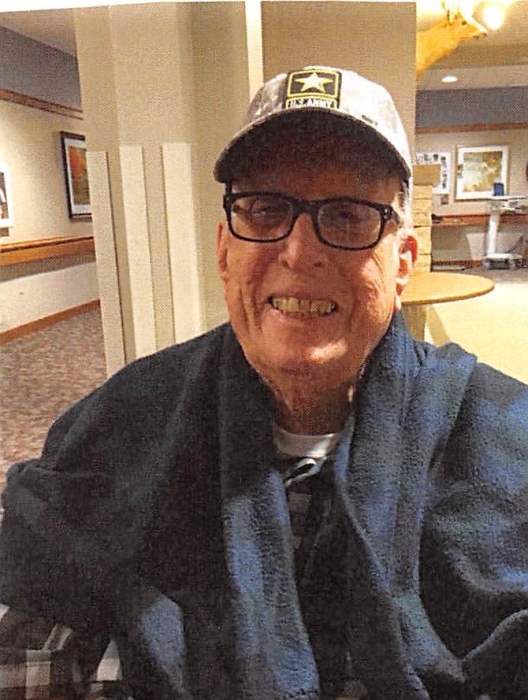 Bernard “Bud” Priske, 87, of Eldora, passed away on Wednesday, June 12, 2019 at the Iowa Veterans Home in Marshalltown. A memorial service for Bud will be held on (PLEASE NOTE DATE) Saturday, July 27th at 10:00 AM at Abels Funeral & Cremation Service-Creps Chapel in Eldora. Inurnment will follow the service at Eastlawn Memory Gardens in Eldora with full military honors. Memorials may be directed to the family and messages of condolence may be left for the family at www.abelsfuneralhomes.com

Bud was born on June 30, 1931, in Grundy County, Iowa, to his parents Thomas & Rose (Price) Priske. Growing up in Grundy County near Eldora, Bud attended school in Eldora and graduated with the class of 1949. After high school, he attended trade school in Nebraska to study refrigeration. In 1952, Bud was drafted into the United States Army, where he was stationed in Germany, later in France. He was honorably discharged in 1954. On July 5, 1952, Bud was united in marriage to the love of his life, June Larsen at the Lutheran Church in her hometown of Coulter, IA. The couple were blessed with 4 children.

Before Bud’s stint in the Army, he worked alongside his father in their family owned gas station in Eldora. Years later, he owned and operated Bud’s Inn Bar in Eldora. He then worked a short time for Montgomery Ward in Marshalltown and then began his lifelong career in sales at Iowa Wholesale Supply in Marshalltown. While there, he also helped at UBC in Iowa Falls, United Suppliers in Eldora, and drove school bus for the Eldora school district. He retired from Iowa Wholesale, after 26 years of service.

In Bud’s spare time, the number one thing you would most likely catch him doing was tending to his garden. It was a hobby he truly cherished and he was good at it! His green thumb helped him grow many fruits and vegetables, including apple and pear trees. In addition, he also enjoyed fishing, hunting, attending the Iowa State Fair and annual Cattle Congress in Waterloo. He was an avid reader, a science and history buff you could say. He was always watching documentaries and learning something new, whether through a documentary on TV or in print.  In his later years, Bud enjoyed traveling to visit his family out of state. Bud had a great sense of humor and loved to make people laugh. His family will miss him dearly but will treasure all the memories they made with Bud through the years.

To order memorial trees or send flowers to the family in memory of Bernard Priske, please visit our flower store.