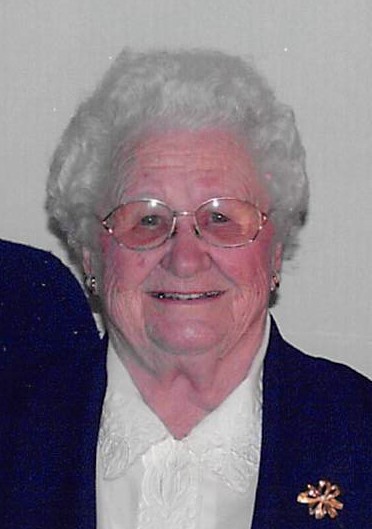 Anna Frances Morrison, 96, of Reinbeck, passed away on Wednesday, January 10, 2018, at Parkview Manor Nursing Home in Reinbeck. A visitation will be held Sunday, January 14, at French Hand Funeral Home from 4-7 PM, with a rosary service being held at 6 PM. A Mass of Christian burial will be held Monday, January 15, 2018 at St. Gabriel’s Church in rural Reinbeck at 10:30 AM, with Father David G. Kucera officiating. Interment will follow the luncheon at Reinbeck City Cemetery. Memorials may be made to the family to be donated to a charity of their choosing. French-Hand Funeral Home is caring for Anna and her family. Online condolences may be made at www.ablesfuneralhomes.com

Anna Frances Morrison was born on April 8, 1921 in rural Grundy County to her parents Rudolph and Frances (Duschanek) Wanitschke. Anna attended school in Grundy Center graduating with the class of 1937. Anna went on to attend college at Ottumwa Heights Community College, achieving an associate’s degree in accounting. Anna was united in marriage to Russell Morrison on February 23, 1946 at the Sacred Heart Catholic Church in Grundy Center, Iowa. Anna spent her life as a homemaker living beside Russell on the family farm. Anna enjoyed spending time with family and friends. Anna was known to always keep the coffee pot on, never knowing who would stop by. Anna had her hair done every Friday and nothing would keep her from doing such. Anna enjoyed van trips to the casino and people watching.

To order memorial trees or send flowers to the family in memory of Anna Morrison, please visit our flower store.