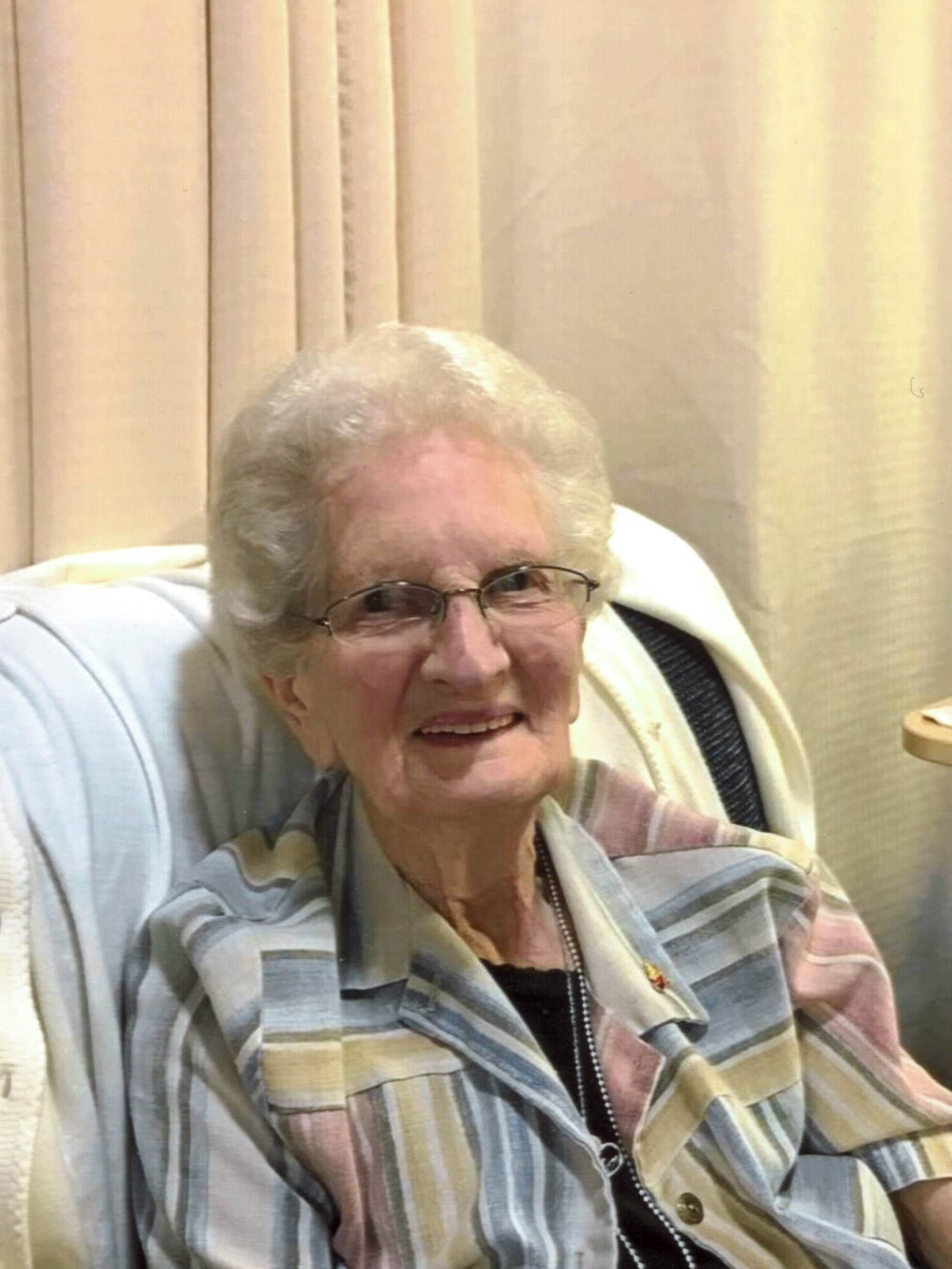 Anna Mae Deters, 88, peacefully passed away on Saturday, the twenty-ninth of April, at Scenic Manor in Iowa Falls.

Born July 21, 1928, in Grundy County, Anna Mae Riebkes was the fourth of five children. She had a joyful childhood, filled with love. A motivated and excellent student, she enjoyed attending the Grundy County Country School through the eighth grade.
One fateful day, Anna Mae met Jack Deters on the bridge of a country road, near her home. A friendship was formed, which later blossomed into much more. When Jack returned home from his military service, the two reunited, and fell in love. Anna Mae had found her soulmate. The couple was married on September 1, 1948, at the Little Brown Church in Nashua. At the beginning of their marriage, the couple resided in several small towns in the Grundy County area. They finally settled down and took permanent residence in Wellsburg. Jack enjoyed working as a mechanic, and started an automotive shop in their garage. Anna Mae worked by his side, taking care of financial records and other components of the family business.

The couple was also blessed with three beautiful daughters. As they grew, Anna Mae decided to take a job as a custodian for the Wellsburg Community School in 1974. She genuinely loved her job, especially forming relationships with the students, teachers, and staff. She worked there for thirty-five years, until reluctantly making the emotional decision to retire.

In 1987, Anna Mae lost her husband, Jack. Her unconditional faith, as well as the support of her family and friends, gave her the strength she needed to carry on. A long-term resident of Wellsburg, Iowa, Anna Mae was known by all to be compassionate and kind-hearted. She made friends wherever she went, and cherished those friendships immensely. She never skipped an opportunity to make others feel special. It wasn't uncommon for her to deliver homemade treats to her friends and family, which was, of course, always appreciated. Naturally, Anna Mae never forgot birthdays, anniversaries, or other significant occasions of those she loved. She always remembered, and she always had the perfect card. More likely than not, the card was sent soon enough to make it on time, if not early! That was Anna Mae, as thoughtful and selfless as a person could be. Anna loved attending high school athletic events, cheering "Her Cougars" to victory. She also looked forward to Sunday services at the United Reformed Church, and participating in church functions. It was not uncommon to call her house, only to get an unending series of rings. Whether she was playing cards, or simply visiting friends and family, she was always out, living life to the fullest.

Anna Mae was admitted to Scenic Manor in February of 2016. True to her social nature, she participated in many of the activities offered. She especially loved attending Bible Study. She also enjoyed participating in mind games and Bingo. She had quite the competitive streak, and was not pleased when she didn't win. She was also horribly annoyed when others shouted out a false Bingo claim. Watching Iowa football and basketball games, as well as the Cubs, continued to be favorite pastimes for Anna Mae, as did writing and giving cards. She began writing cards for other residents, and would have them delivered to the dining room. She also enjoyed visiting with the residents and staff at Scenic Manor. However, there was one issue that never met her standards. When she pushed her room button, she expected an immediate response! This humored her visitors, as well as the staff. As always, Anna Mae had the ability to spread happiness and make others smile.

Of all the joys in her life, nothing was more valuable than spending time with her children, grandchildren, and great-grandson. Family gatherings were beyond special, filled with chatter and laughter. As social as she was, many times, she couldn't get a word in. She most certainly taught her family the skill of conversation, and this talkative tradition will continue to be carried on. Not only was Anna Mae blessed with a life full of love; all those who knew her were blessed to be a part of it.

Anna is preceded in death by her husband Jack, her parents Bertha and John, two brothers, and two sisters.

A funeral service for Anna will be held at 10:30 a.m. on Wednesday, May 3, 2017 at the United Reformed Church in Wellsburg, Iowa with Pastor Joel Wories officiating. Burial will follow at the West Friesland Cemetery in rural Wellsburg. A visitation will be held from 5:00 p.m. to 7:00 p.m. on Tuesday, May 2, 2017 at the Doyen-Abels Funeral Home in Wellsburg.
To order memorial trees or send flowers to the family in memory of Anna Deters, please visit our flower store.