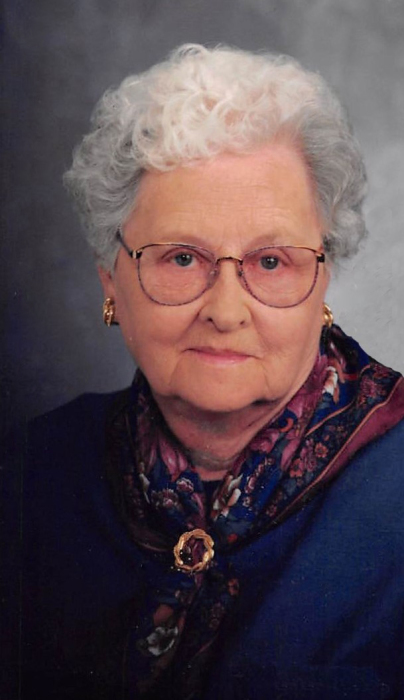 Alberta was born on March 27, 1920 in Granger, MN, to her parents Willis & Alta (Scott) Copeman. The family moved to Independence, then to Vinton and finally settled in Grundy Center, Iowa in 1938. She graduated from Grundy Center High School in the class of 1939. Alberta worked as a telephone switchboard operator during World War II. She then helped her parents manage their family owned business, the Grundy Produce and Hatchery.

She was united in marriage to Ross G. Sharp on August 20, 1947 at the Little Brown Church in Nashua, Iowa. Together they welcomed their son Thomas Ross and their daughter Ann Jolene into their family. They farmed south of Gladbrook and had a cow/calf operation that Alberta helped manage. Alberta also managed a concession and boat rental stand at Union Grove State Park for 10 years.

Alberta was a longtime member of the United Methodist Church in Grundy Center. Her spiritual gifts were encouragement, hospitality and service. Alberta was always quick to have a meal ready for anyone in need. She was always ready to provide support and help to anyone experiencing difficulties. She even cheered people up during the last 4 years at the Long Term Care Unit by wearing her “crazy” socks. She loved to cook and had beautiful flower gardens. However, her true joy in life came from spending time with her family, especially her grandchildren and great-grandchildren.

To order memorial trees or send flowers to the family in memory of Alberta Sharp, please visit our flower store.