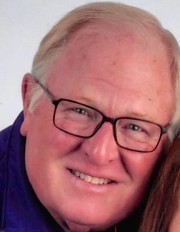 Funeral services for Alan will be held at 10:30 a.m. on Tuesday, August 31, 2021, at the Traer United Methodist Church located at 512 4th Street, Traer, IA 50675.  Pastor Harry Wach will be officiating the services for Alan.  He will be laid to rest at the Reinbeck City Cemetery, immediately following services.  Public visitation will be held from 5:00 – 7:00 p.m. on Monday, August 30th, 2021 also at the Traer United Methodist Church where his family will be present to greet friends.  Memorial contributions may be directed in Alan’s name to his family which will later be designated elsewhere. For further information or to leave a condolence please visit www.abelsfuneralhomes.com. The French Hand Funeral Chapel is caring for Alan and his family.

Alan Peters was born on May 20, 1951, in Eldora, Iowa the son of Marlyn and Ines (Bockes) Peters.  He was raised and educated in the Grundy County school district, where he graduated from Reinbeck High School with the class of 1969.  Following graduation, Alan went onto Ellsworth Community College one semester.

On December 19, 1969, Alan was united in marriage to Linda Johnston in Grundy Center, Iowa. From this union, the couple had three children: Angela, Chris and Natalie. Alan was a very hardworking man, where he dedicated forty years as a self-employed flooring installer.

He had many passions in life such as playing golf, riding, and providing support for Linda and his son for over 20 years on RAGBRAI, eating chocolate, traveling and attending his kids and grandkids school events.  Alans number one passion was the time that he got to spend with his family and friends.

He is preceded in death by his father: Marlyn Peters; and his In-Law’s: Wilford and Betty Johnston.

To order memorial trees or send flowers to the family in memory of Alan Peters, please visit our flower store.